I was finally able to showcase our super cool outdoor swing bed in this post, and promised a tutorial on how to build your own outdoor swinging bed.  Well, here it is! At least part one.  It took us about 2 weeks to demo, build, hang, stain and seal it all- so  I’ll do my best to explain how it all happened. First, however- I want to share some new photos of my favorite resting spot in the entire state of Texas! 🙂 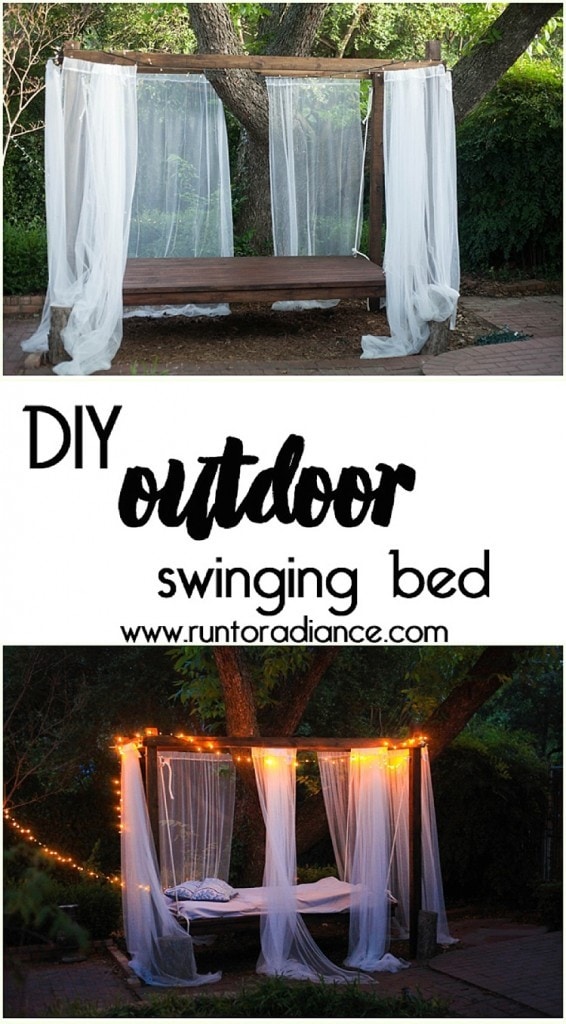 How to Build Your Own Outdoor Swinging Bed 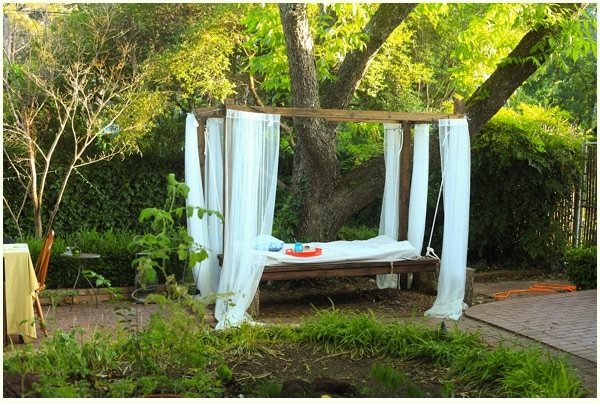 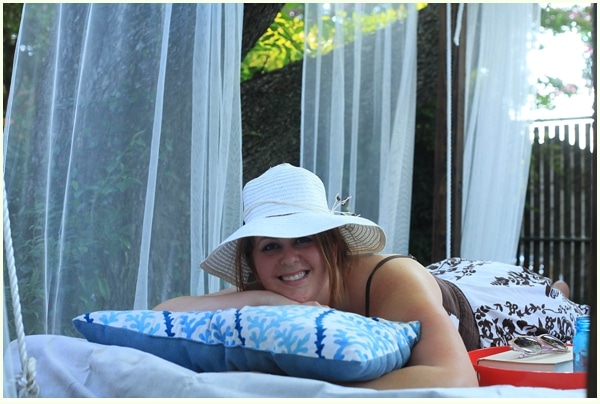 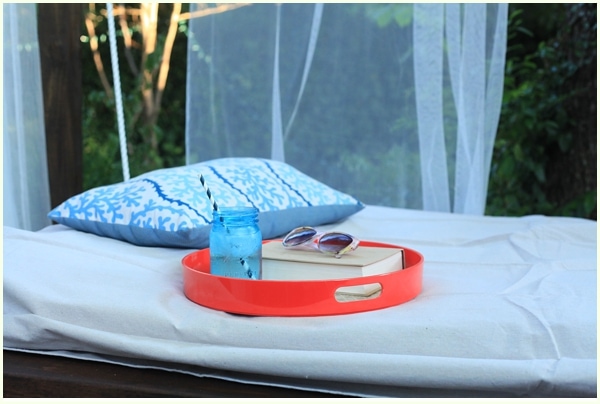 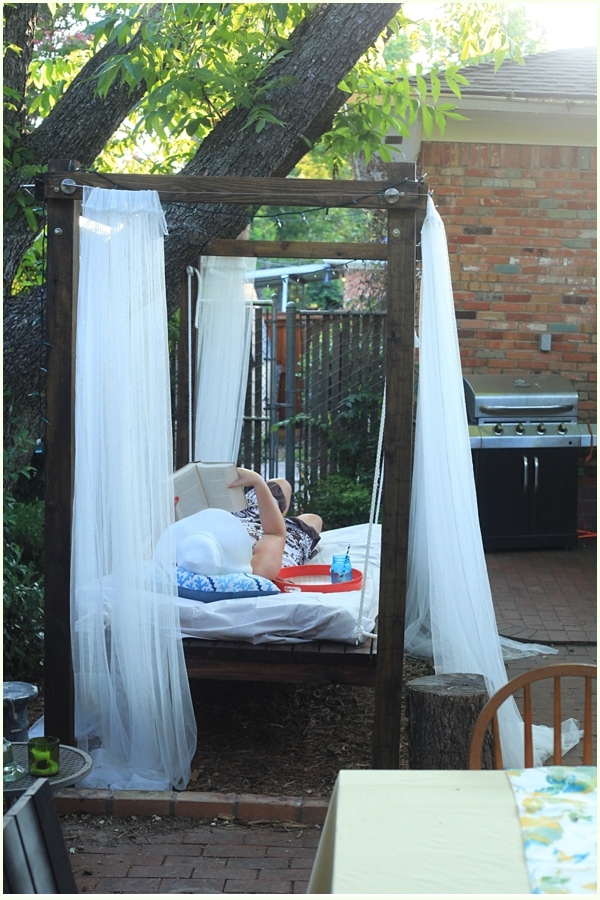 Now for the “fun” part.  How to build one of your very own swing bed. So- for a frame of reference- this is what came with the house when we moved in.  A scary, rickety deck, with a super wobbly frame and a plastic love seat chair. 🙂 Not really our style 😛

I had really wanted a hammock for a long time, but wanted something more stable and solid that I could lay and read on.  I am a huge bookworm- true story! 🙂 Finally, I came up with the idea of a swinging bed wooden platform with thick cushions and nice pillows on it. So that’s what we were going for!

How to Build an Outdoor Swinging Bed- Part 1: Demo and Framing

We started with ripping up the old rickety deck, which was so old and rotted it took about 45 minutes to demo…but we are true demo experts- check out this post on our favorite way to demo!  We started by prying off the sides, then ripped up the boards, then finally the top. 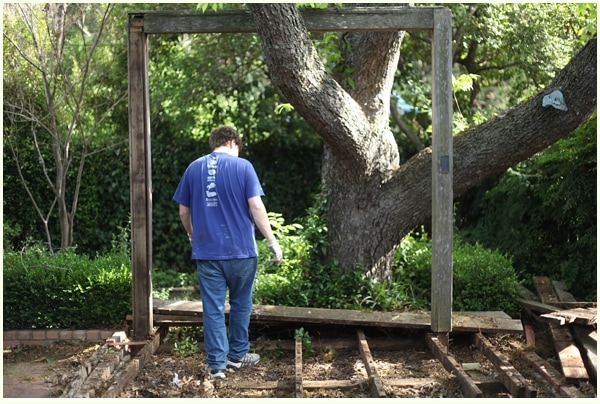 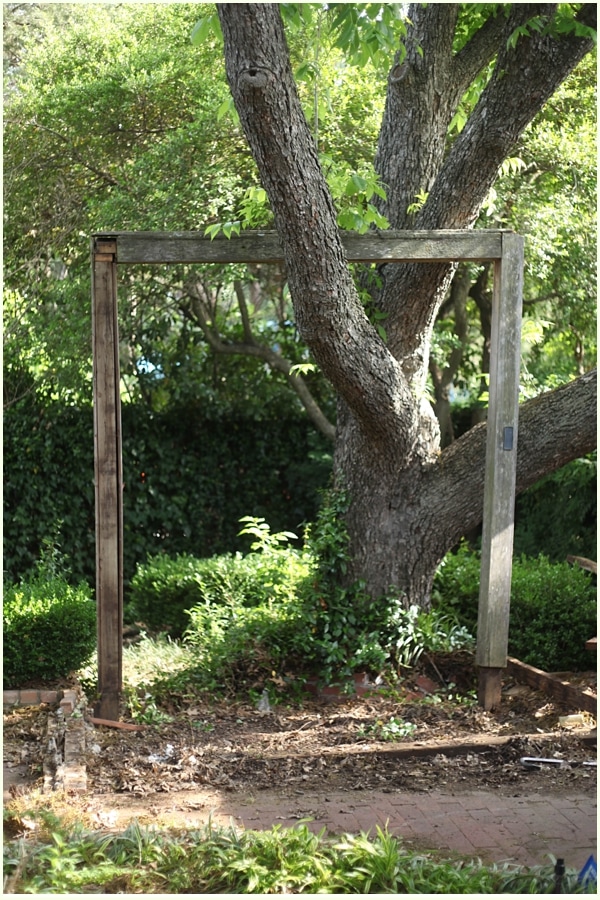 Here’s a nice photo of Scott in action 😉 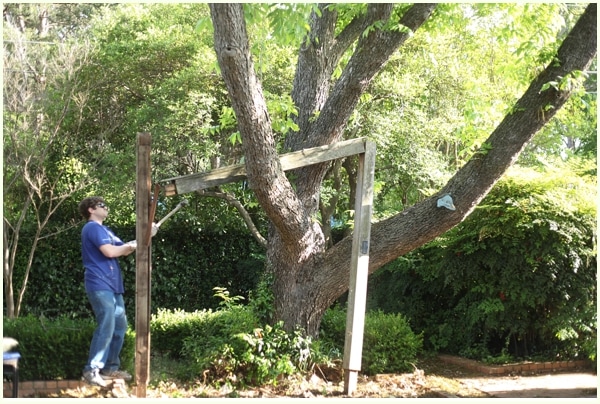 There was only one post cemented into the ground, which was really hard to remove.  Scott tried to hit it with a sledgehammer, but finally he gave up and I took care of business, of course! 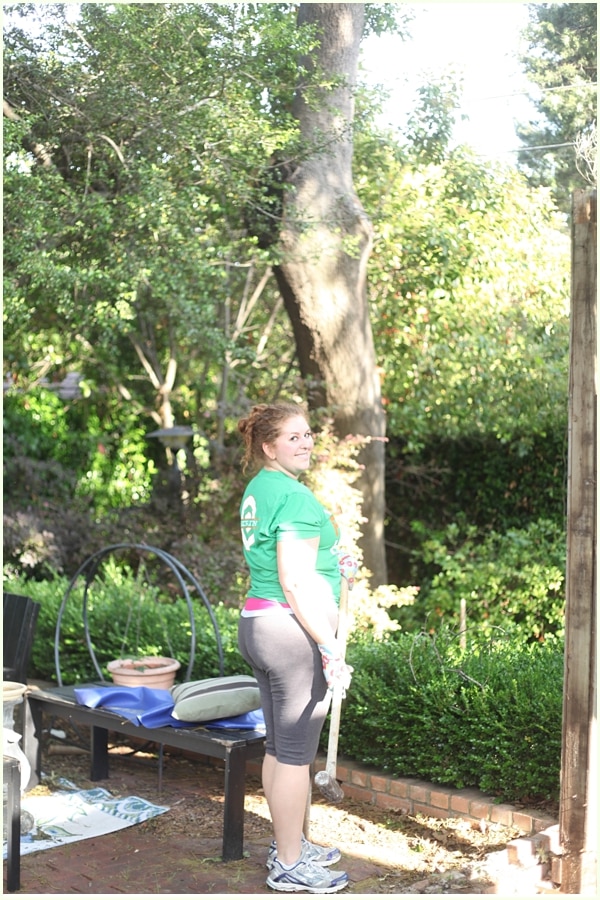 Totally kidding, Scott just sawed it off at the base. 🙂

Then it was time to build the new frame!  My dad and Scott tackled this one. 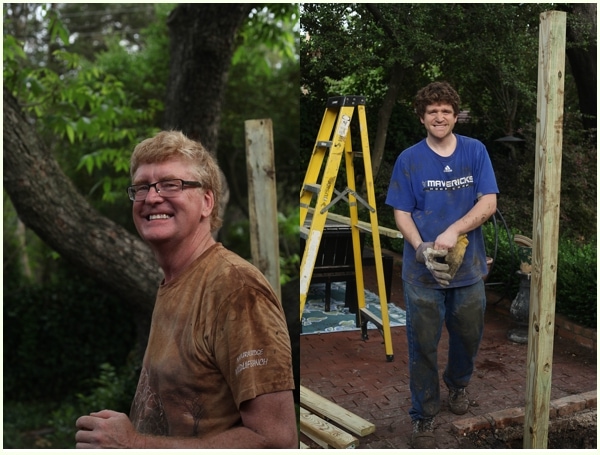 We knew we wanted the bed/platform to be about the size of  a twin mattress, so they spaced the posts out accordingly.  The guys made sure it was the same length and width apart and all four were square. 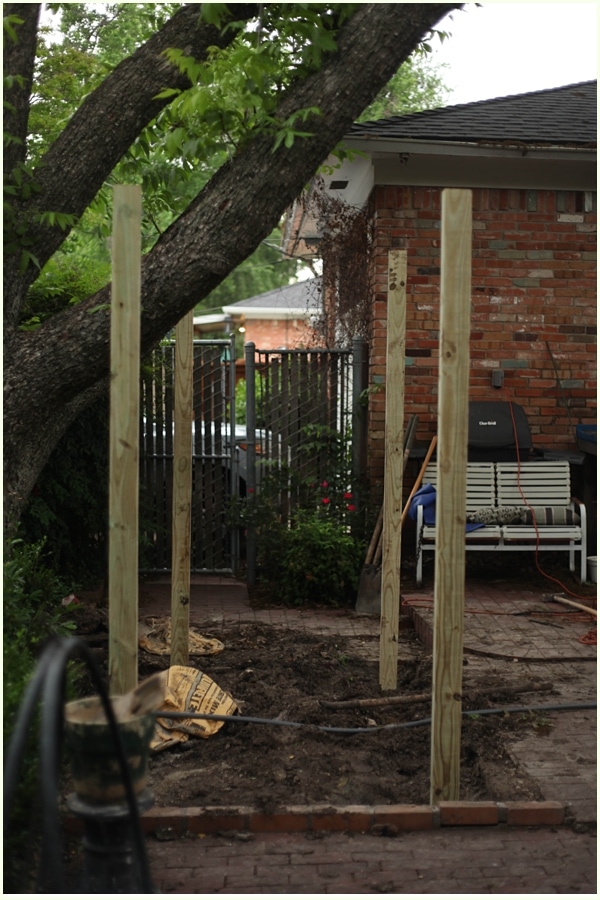 They then marked the four swinging bed posts and used post hole diggers to dig 30″ into the ground, which was even more of a chore due to some tree roots that were in the way.  It was much easier to dig when the ground was wet, so they used a hose to make sure it was extra muddy- resulting in both of my men being covered in mud! 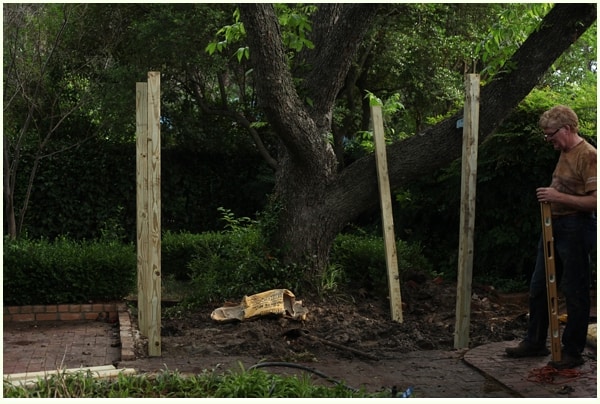 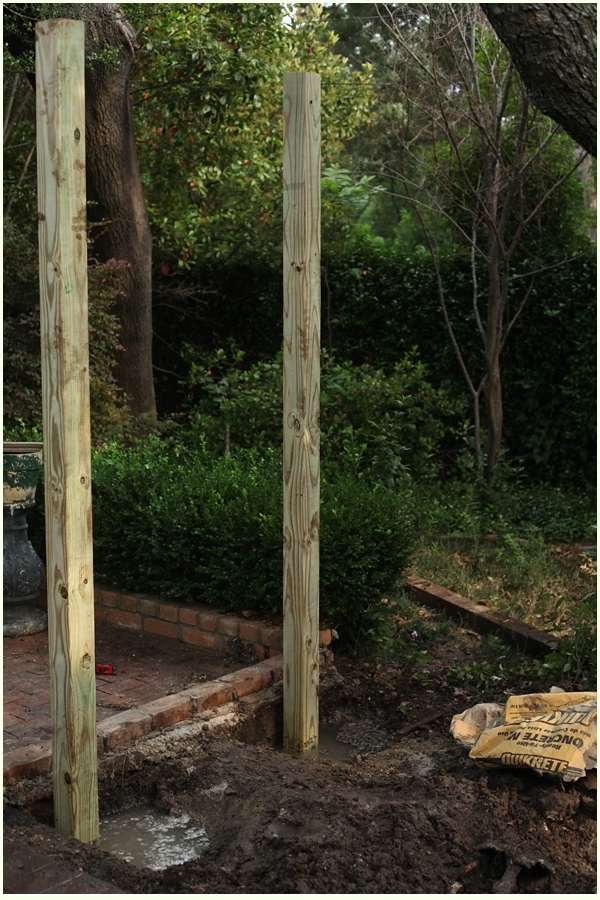 They then placed the beam in the ground, poured a bag of quikrete concrete in each one and filled the rest of the hole with water and dirt.  They used a level to measure both sides of each beam to ensure it was straight while they were pouring the water in, and Scott checked it several times in the hours after.

The concrete/water mix dried after several days which was the worst part…boo waiting! Before we could proceed with our project we had to make sure the posts were perfectly level and concreted in so the swinging bed would be sturdy.  It was like waiting for paint to dry…but worse 😛 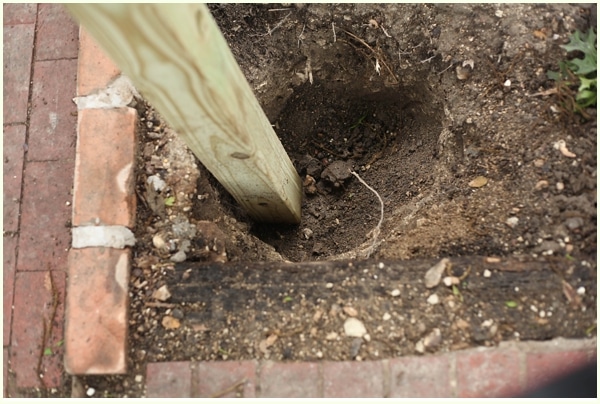 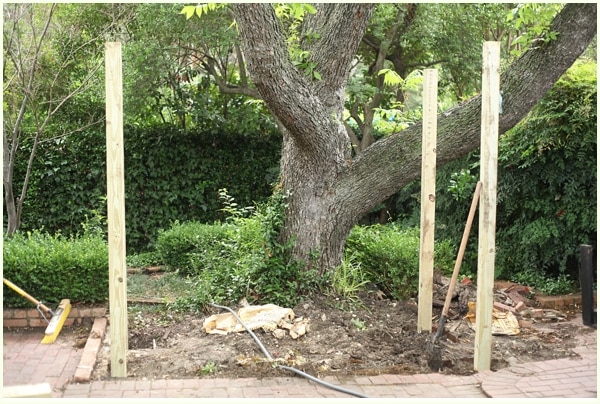