Prior to this kitchen, I have remodeled four galley kitchens. Each one has its own unique challenges and this small kitchen layout on a budget was no exception. We toyed around with the floor plan for weeks with a ton of trial and error before we finally came up with a floor plan that helped our tiny galley kitchen feel much bigger!

This post contains affiliate links at no additional charge to you.

Unsurprisingly, I am not a fan of popcorn ceilings, so removing it from our entire home, including the kitchen, was the very first thing we did when we were finally handed the keys. By we, I mean our contractors, because scraping popcorn ceilings is one house project I am 100% okay with hiring out to an expert. My arms were thankful! 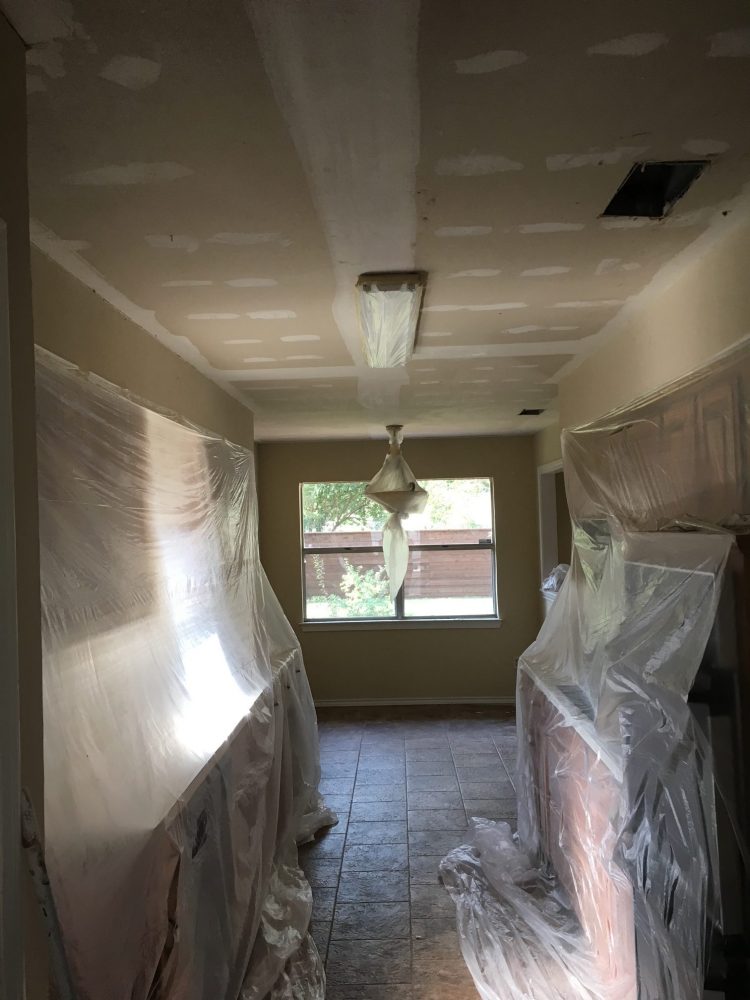 The entire house, not just the kitchen, was covered with the thickest layer of popcorn ceiling textures I’ve ever seen. It’s like the person who added it really wanted to commit to the idea of a popcorn ceiling and just slathered it on and on. ? You can see the visual proof in the before pictures right here.

Removing it made a huge difference, even though it technically wasn’t layout-related—it made the room look much taller and more modern.

I think in many ways, this was the most challenging kitchen remodel we’ve done. In previous kitchens, we left the floorplan basically the same but opened it up. This kitchen had a pretty funky layout for a galley kitchen remodel—you can see from the picture that there was a weird-shaped opening in the wall that served basically no purpose (other than visual eyesore ?). 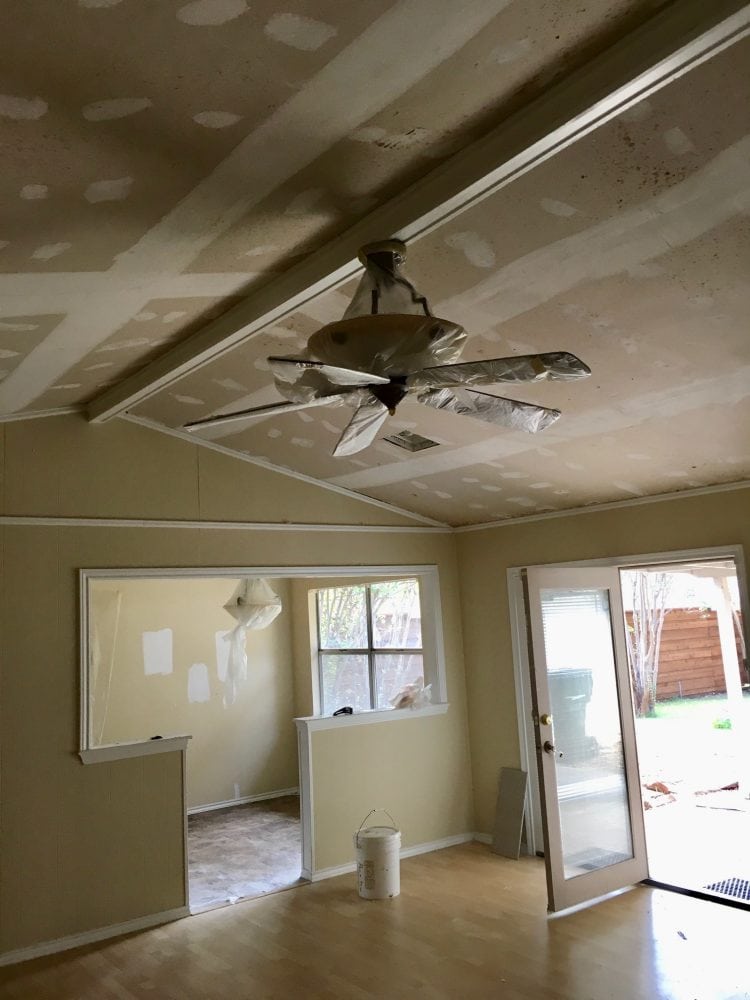 After consulting with our contractor, we came up with a plan to open up the kitchen to the living room. I’m oh-so-casually leaving out the fact that we actually came up with several plans—changing our mind about them after our contractor went and did the work that we asked him too!

For example, we asked them to take down the upper cabinets on one side because I wanted to do open shelving. After I saw how lopsided it looked just doing one side, I couldn’t handle it and asked them to put the cabinets back up. Luckily bulk trash hadn’t come yet and we still had the cabinets haha! 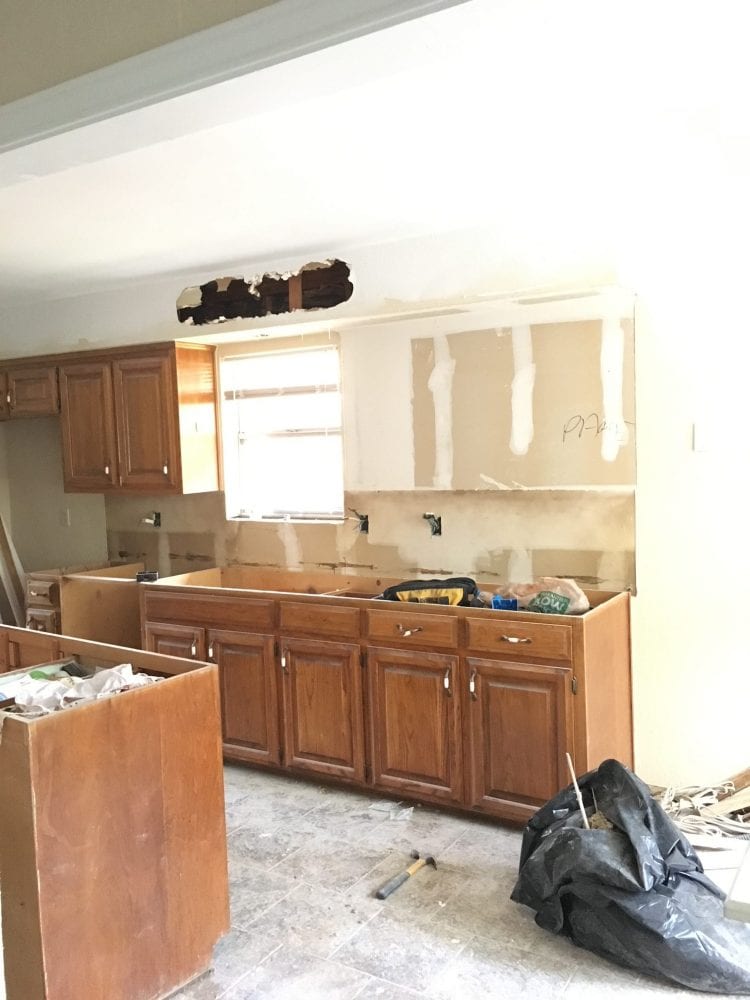 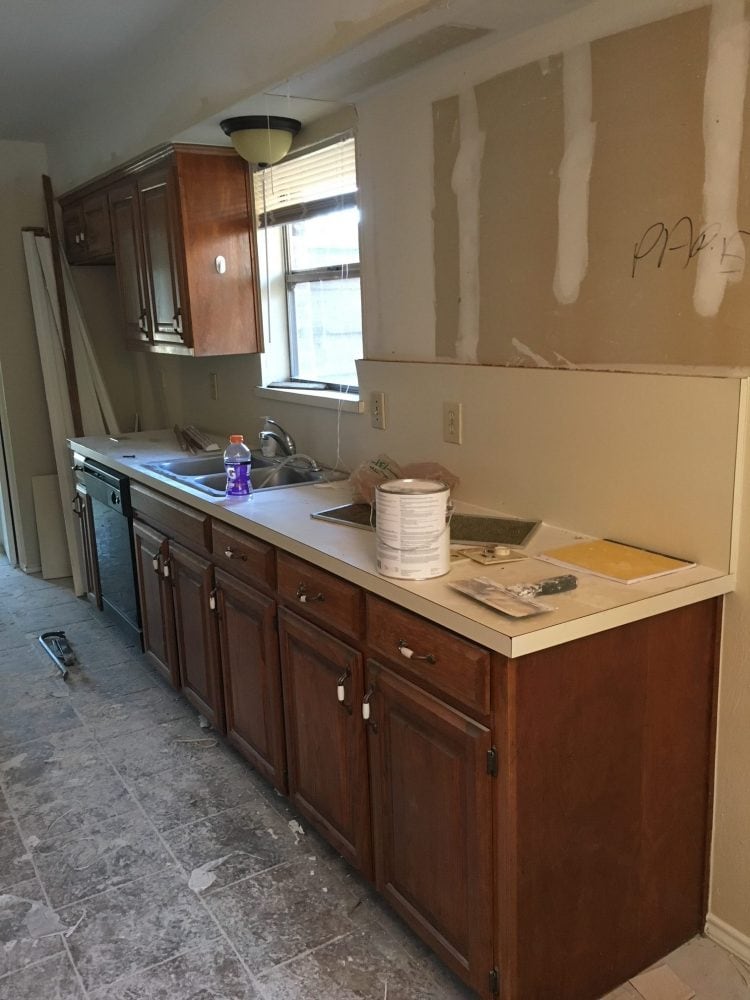 With a small kitchen layout on a budget, you have to be pretty intentional with every bit of space you have. Scott and I debated for a few days about whether we should create an island in the kitchen by opening up the wall on either side of the cabinets, versus only opening one side. Opening the wall on both ends would give us the open look we wanted, but obviously make us lose cabinet space. In the end, we decided to open the wall on both sides and just have to be intentional with space we did have. 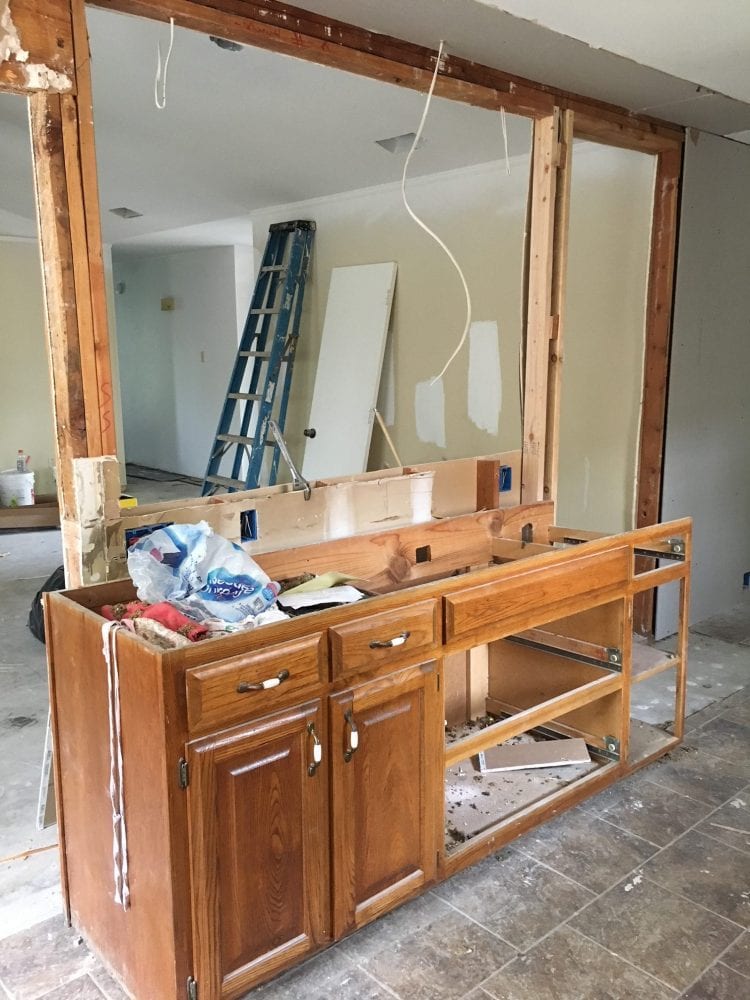 We had to keep the two columns on either side of the island to run electric and the gas pipes, as well as support the wall. Getting rid of them and putting piping and electric in the ground or through the attic just wasn’t in the budget this time sadly! I didn’t like it at first, but I had a lot of fun wrapping them in garland for the holidays and think they add a festive element. ? 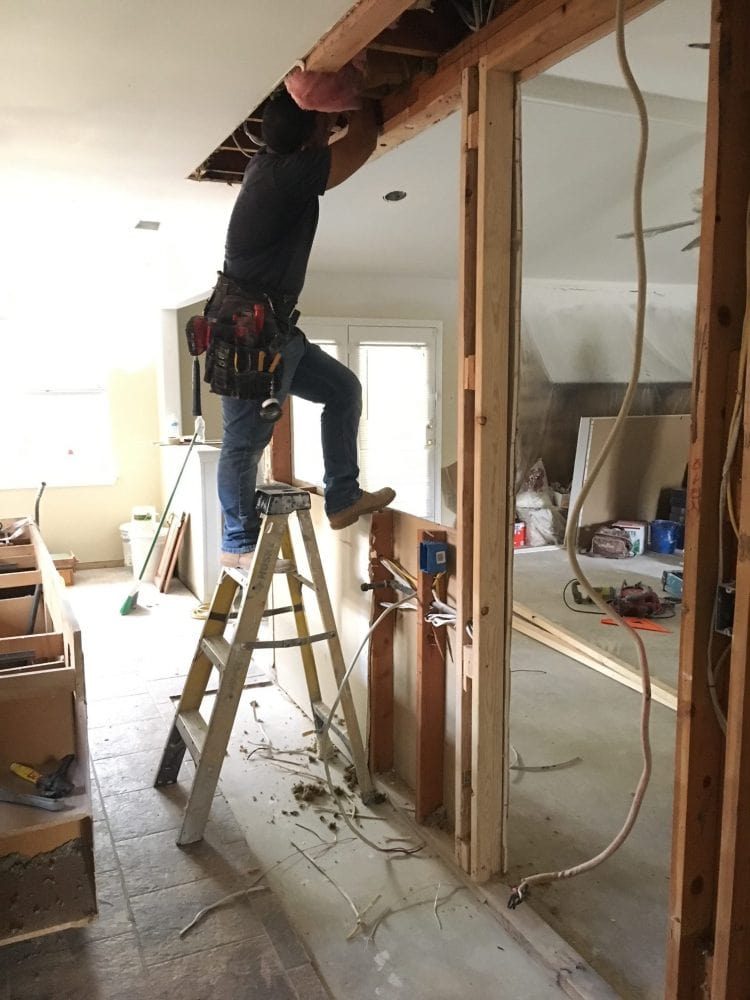 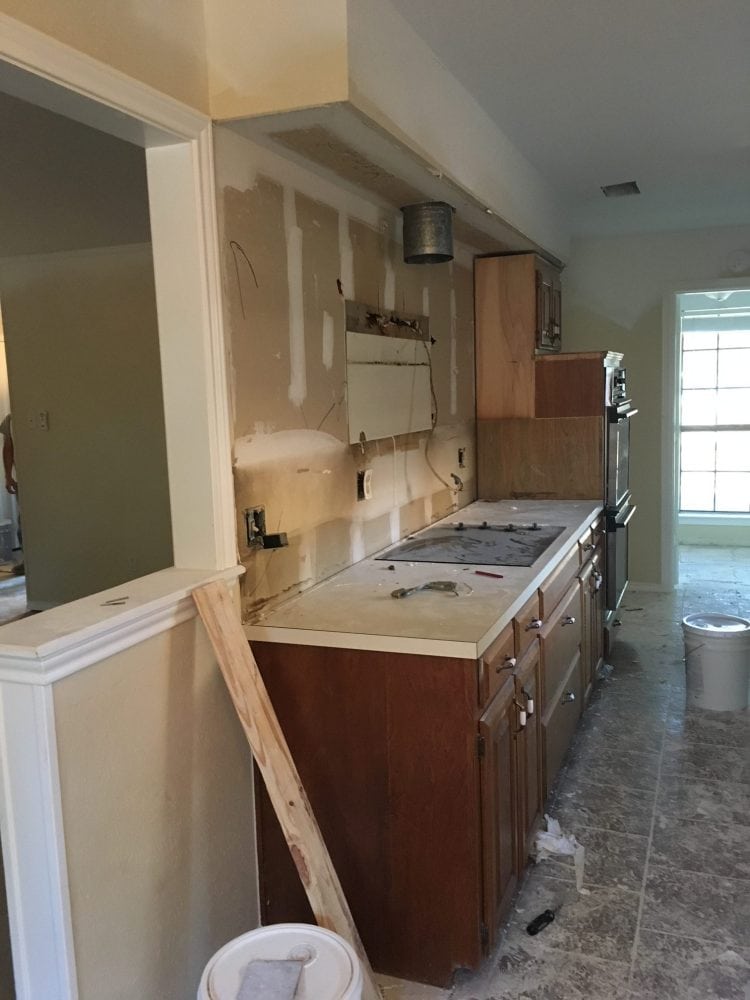 Literally every appliance in the kitchen pretty much failed the home inspection, so we knew we’d be replacing them all. That helped us feel a lot more free about changing up the layout as needed. While I love the idea of having double ovens, a small kitchen layout on a budget doesn’t necessarily accommodate that. In the end, we decided to consolidate and get a range instead of the cooktop with a double oven that the kitchen originally housed. This helped us get some extra counter space which was definitely needed!

Since we were working with a small kitchen layout on a budget, we opted to keep the current cabinets. Although these cabinets were built together as a unit (rather than individual boxes), our contractor was able to use a reciprocating saw

to carefully cut each piece apart and rework them into the new floor plan, making up for the gap where the double oven used to be. While the cabinets aren’t our dream ones, they are free, which makes them pretty dreamy IMHO. ? 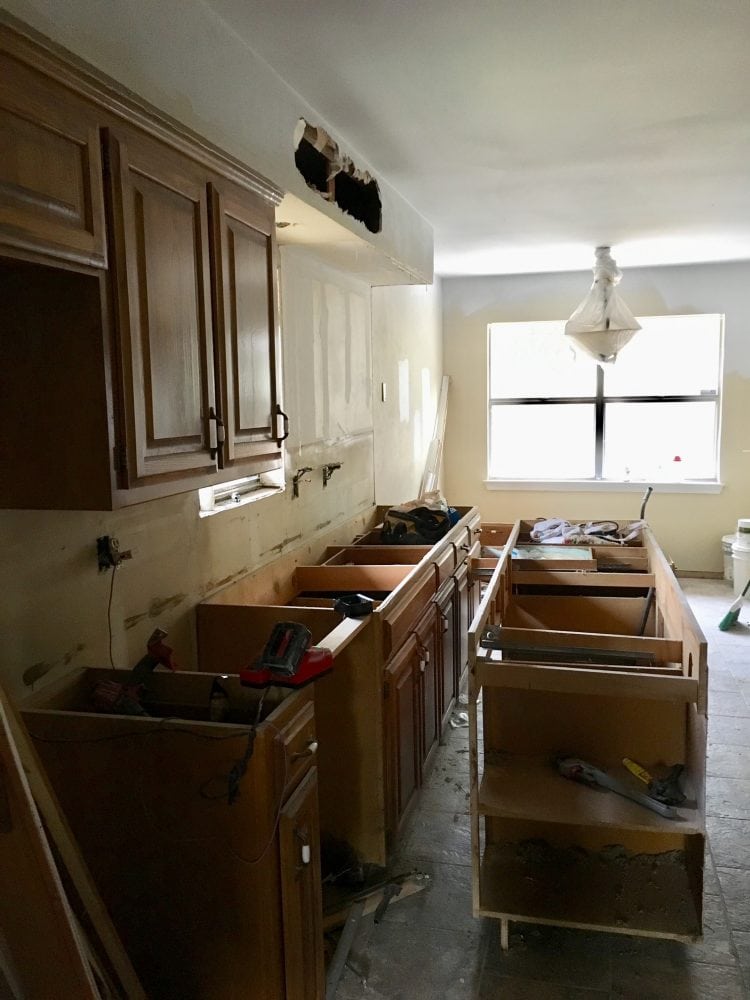 In the end, we knew this was a somewhat band-aid-fix remodel. We plan on doing a bigger remodel in a few years and getting brand new cabinetry but decided with a baby it was best to save money wherever we could. So, if something in the kitchen wasn’t my dream, it’s NBD because in a few years I can make it whatever I want it to be. Of course, I have a giant Pinterest board full of ideas! 🙂 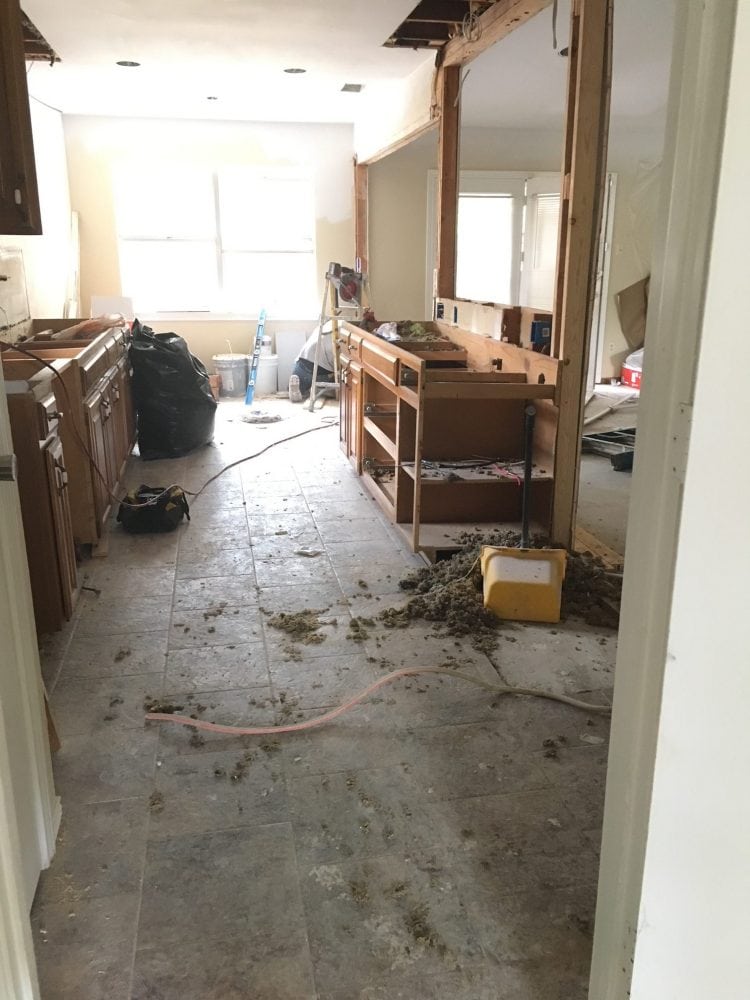 For a pretty minimal budget, I think we came up with the best floor plan we could—soon I’ll be sharing what I did to pretty it up a little more (hint: paint, duh!).