Ever since we finished our studio room (check out the huge reveal here!), I’ve found a constant place of solace where I can go and be creative. However, there was one major issue…our stools were a literal pain in the ass. 😉 They were wooden with no cushion, no back support, no arm rests and to top it off, they were slightly too high so our thighs would press against the table. I ended up rarely using them and instead opting to stand as I worked, which is what I wanted to do the majority of the time anyways….see photo below as evidence of said uncomfy stools! 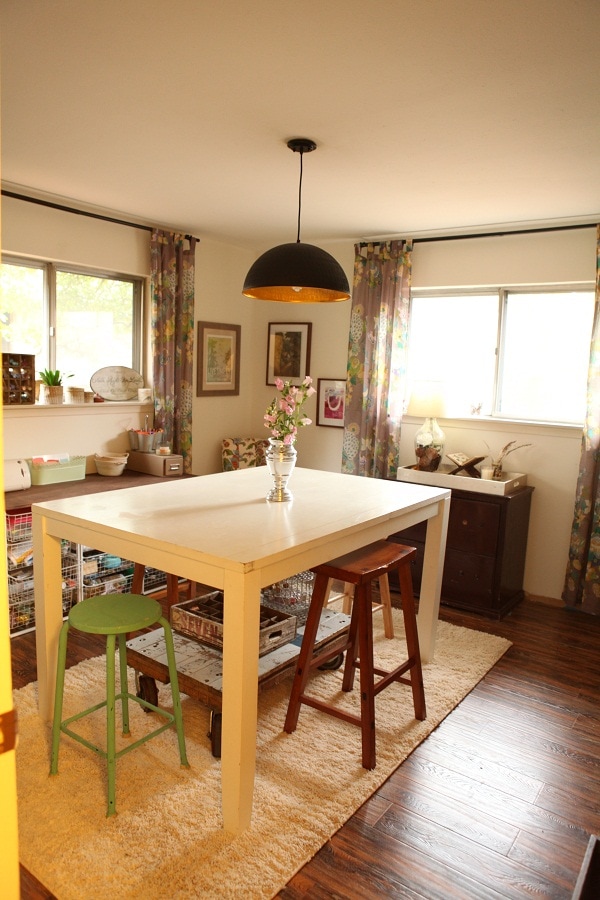 With business picking up for Scott we wanted to squeeze in more quality time together, even if it meant quality time meant gazing over our laptop screens with adoration at one another. 😉 The major problem was there was no way either of us would last longer than 20 minutes on those stools. So I stalked Craigslist and asked around and checked thrift stores and shops….and maybe I’m the only one who was looking for counter height stools with backs so it took FOUR MONTHS of active looking to find them, but I did it! The same day we picked up our work bench from the thrift shop, I happened to see three identical Ethan Allen stools. Counter height. With backs. And arm rests. FOR $15!!! Whaaaat?

I had already been daydreaming about how I wanted to paint the chairs ever since I saw this photo here. What I didn’t know was how much work it was going to be to recreate!

Once I got the chairs home I cleaned them and dried them off, then started the prep work for painting.

The prep work was…interesting. I was sold on keeping the seat wooden, the spindles teal and the rest white, so we had to get creative with some painters tape and Trader Joe’s bags to tape off the sections. It took a lot of time and creativity, but Scott and I finally got it.

Then it was spray paint time! We used the Montana spray paint brand that we picked up from the skate shop to paint my coral stool. I am obsessed with this spray paint—it went on so easily and the color is the perfect glossy white. Definitely recommend this one!

After waiting a few days to make sure the stools were dry (torture), I was itching to finish painting them. But we had a weird, freak occurrence in Dallas where it rained for 5 days straight in the middle of summer, so of course my spray paint plans were foiled (but my grass was grateful!). Finally I just decided to go with it and paint right in the middle of the kitchen with latex paint and a brush instead. No rain is gonna slow me down! 🙂 I tested it on one spindle first just to make sure it worked (it did!).

I had picked up this paint for $1 in the oops section at Home Depot. Those colors are so hit or miss but I immediately snagged this one when I saw it. I’m glad I did! I was a little worried when I opened it up and saw all that raspberry color everywhere, but I just made sure to stir it really, really well and it blended in just fine.

Again, before painting I had to tape off…again, it took forever.

Finally, 3 hours later, I was done.

Don’t they look awesome? They are perfect in their new home in our studio! So thrilled.

I got to test them out when I did some calligraphy the other night. Disregard the stained table top…soon that will be all taken care of! 😉

You might notice the rug is gone from our studio. I decided a white rug in a studio was just not a good idea. So we found the perfect spot for it and moved it, but then of course I had to rework all the furniture…that’s a post for another day. 🙂

No more pain-in-the-bootay stools for us! YAY.