Do you all remember my DIY disaster of a dresser (the one that landed me on the Craftsman Tool’s Radio Show) that gave me pain and heartache until we called our projects quit and decided to paint it white and call it a day? In case you forgot- here it is. 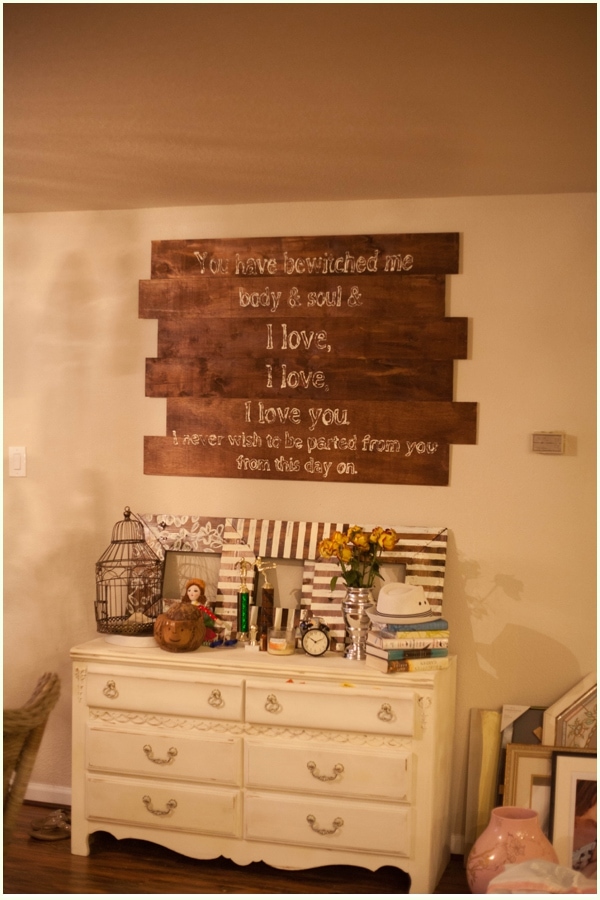 Looks like an innocent childhood dresser, right? Looks can be deceiving. 😛 Either way we have enjoyed using it as a landing zone in our house for keys and the drawers have been helpful enough to hold dog leashes, bills, mail, candlesticks, napkins and tablecloths.

Secretly, in my heart though, I was hoping to move the dresser. Don’t ask me why, but in my heart I really, really, really wanted a piano. Random, I know. No- I don’t know how to play- yet!– but Scott can a bit and both his mother and my sister can, so someone can teach me? Regardless, I have seen some amazing rooms lately with old pianos and it just made me long for one- that, coupled with my ongoing obsession with Pride & Prejudice made me keep an eye out for a stellar deal. Check out how beautiful these rooms are with their pianos- some painted, some not. 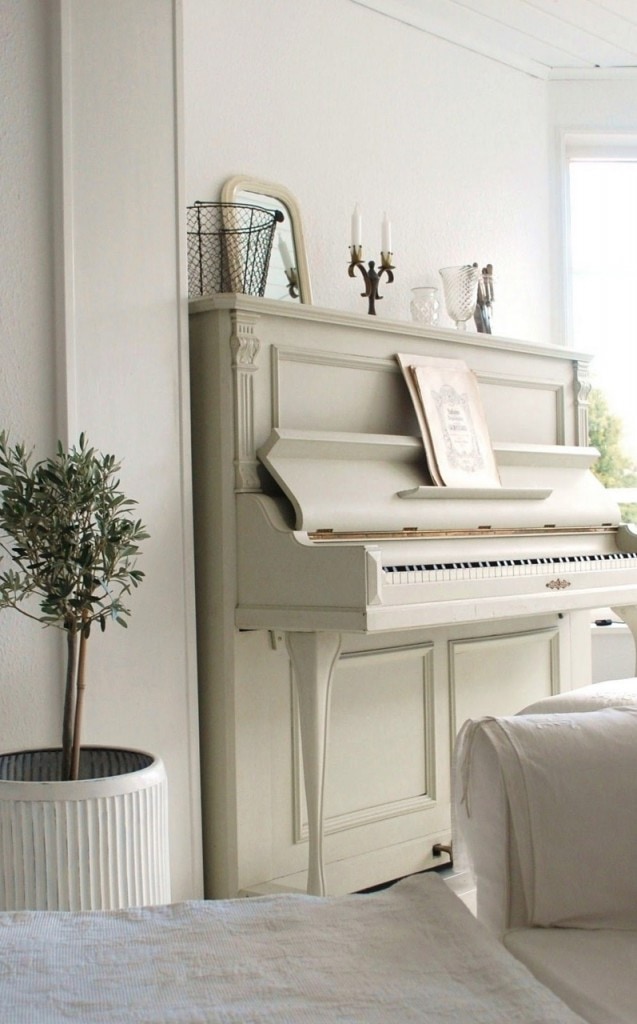 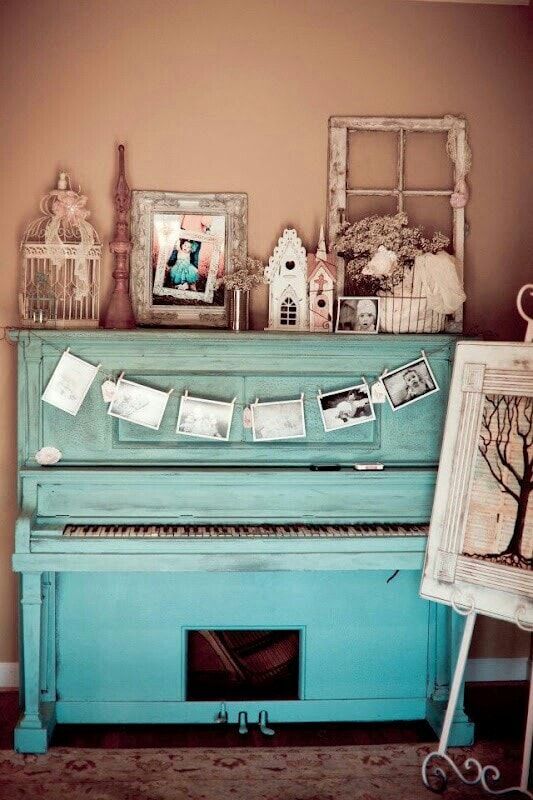 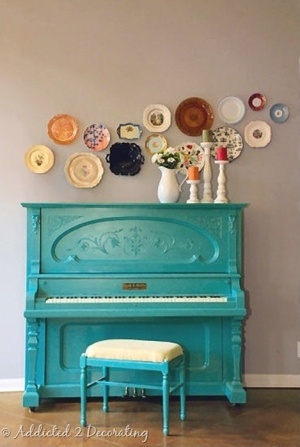 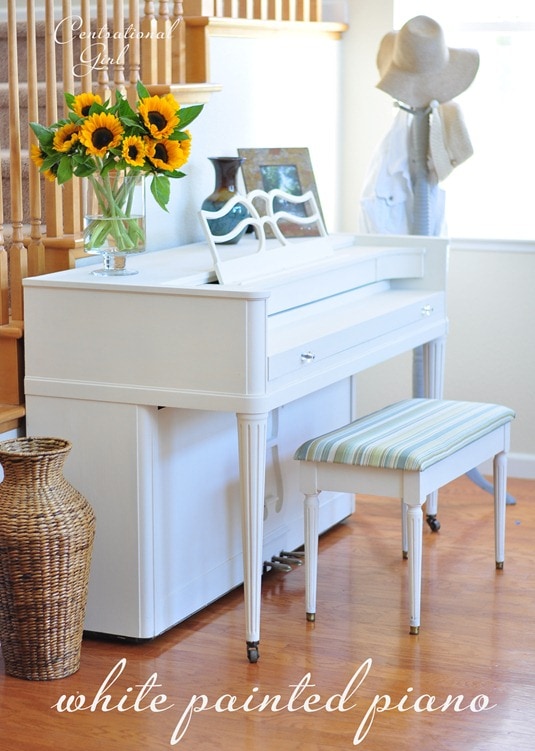 Imagine my delight when my boss mentioned she was getting a new piano and randomly offered to give me her old one! I was so excited and jumped on it immediately. A cool $180 charge to have it professionally moved later, here it is. 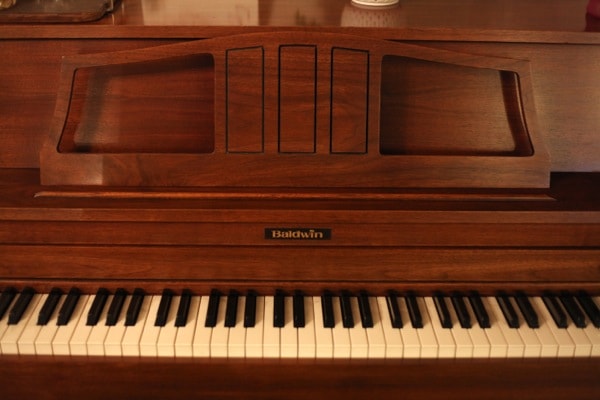 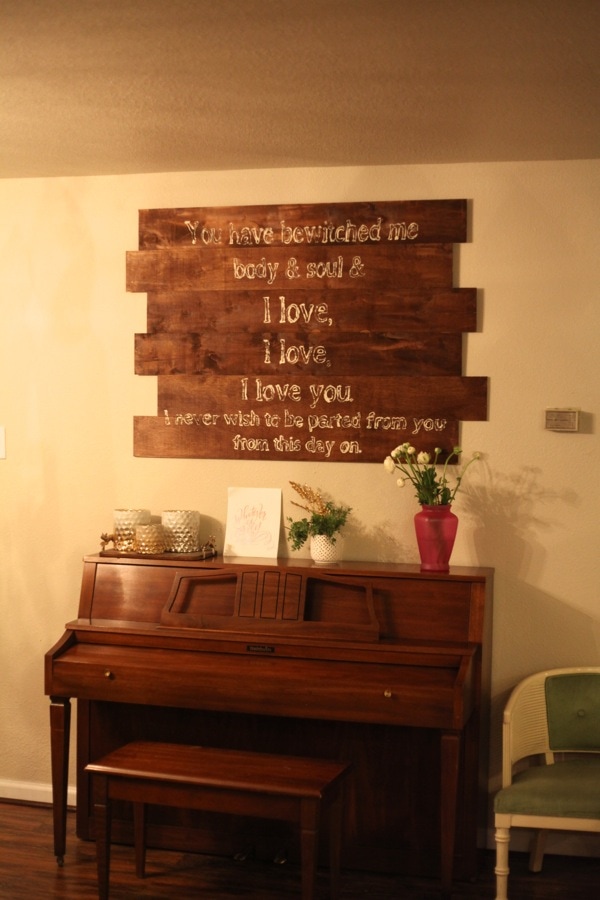 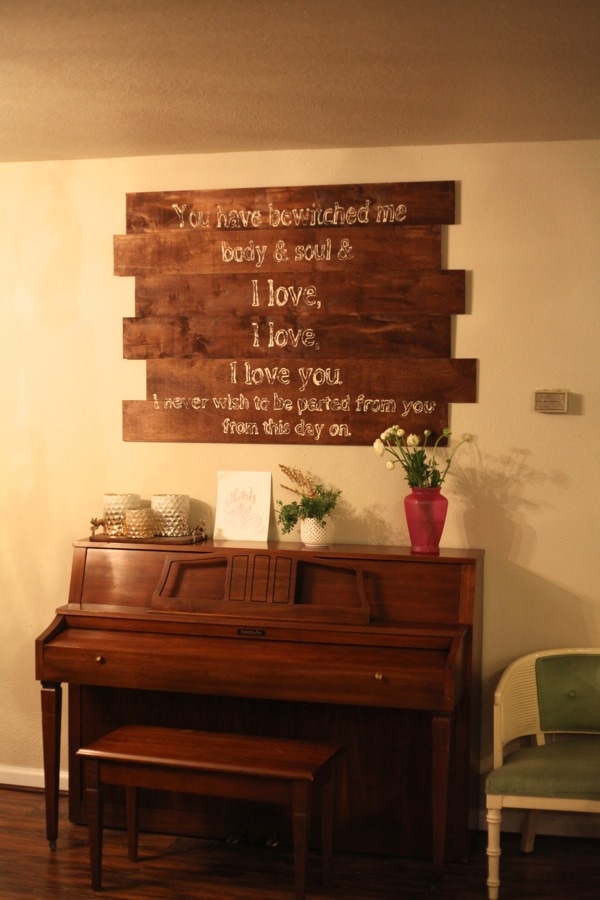 So it needs a bit of work, and some tuning, but we haven’t gotten to that yet. Scott has started playing me piano songs from Pride and Prejudice, and I felt like it was the most romantic moment of my life perhaps. My friend Sang stopped by and played beautifully for us. My sister has mentioned wanting to come by. I have sat and entertained myself for hours by making up music, and teaching myself “Mary Had A Little Lamb” and something that sounds sort of like Jaws. Hah. But music brings people together and I can just imagine many hours of joy and singing over the piano, which makes my heart so, so happy. 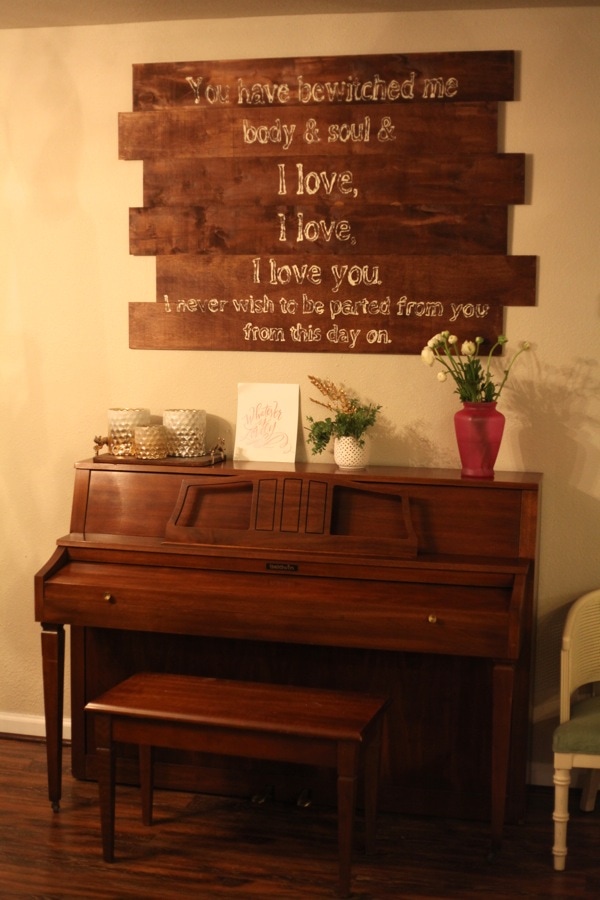 Also, I decorated the top of it a little bit. I didn’t want anything to fluffy to distract from the Pride and Prejudice sign I made, or the beautiful piano itself, so I just added a few pretty details. Just a touch of pretty. 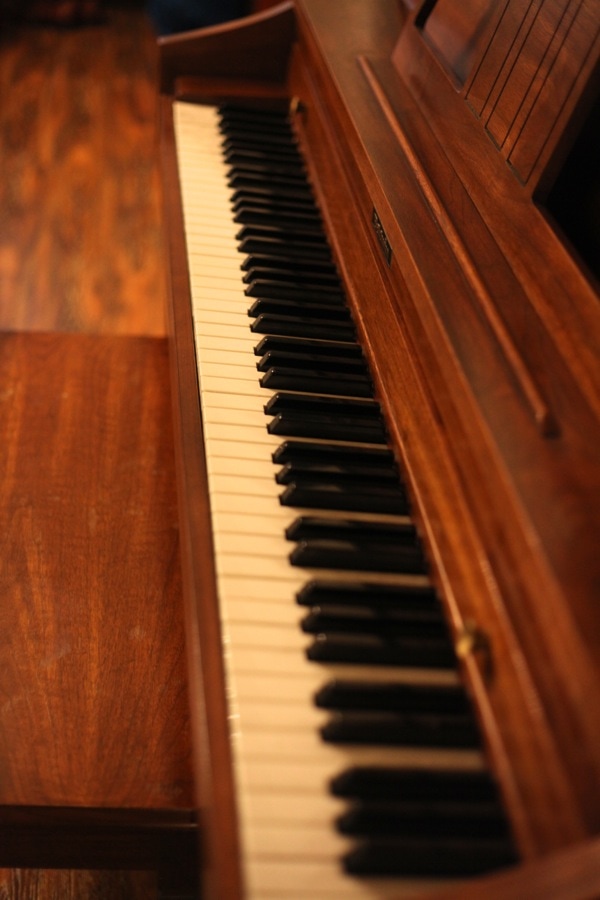 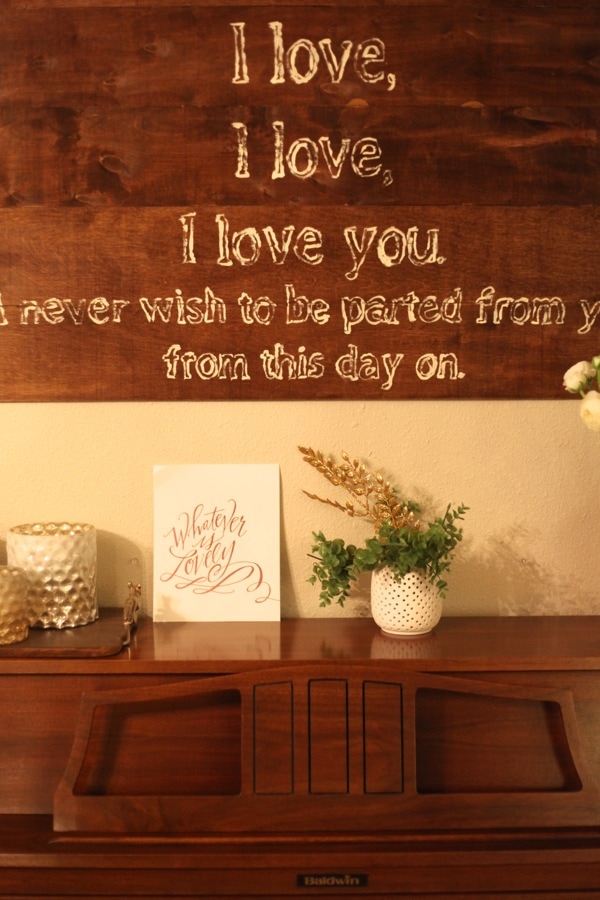 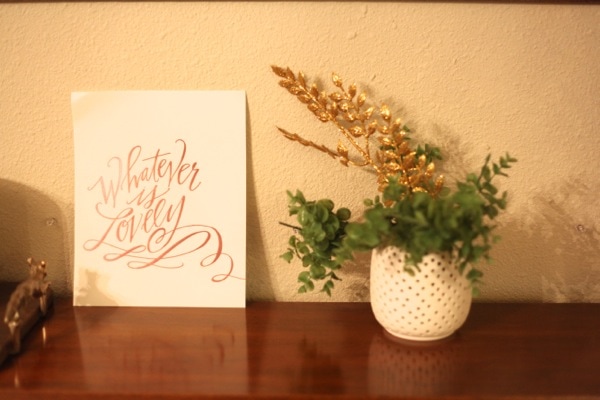 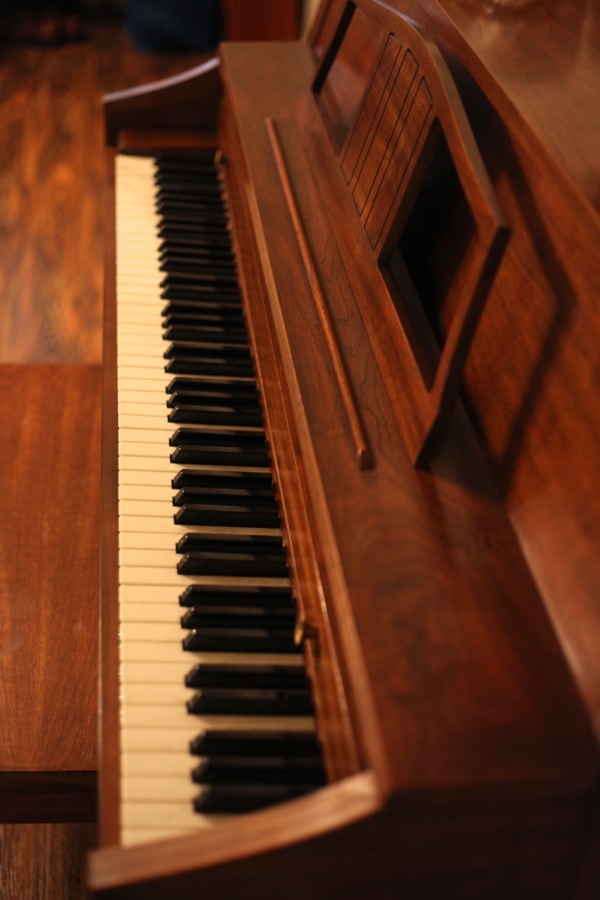 We have debated back and forth about painting it. First, I was totally going to paint it white. Then it came and the wood was so beautiful and we decided not to. Then, I started looking back through all those pretty photos and wanted to paint it mustard yellow, or mint, or a stormy dramatic gray. For now we are doing nothing, except banging out music. Stay tuned for more details (<–haha, see what I did that there?!)! 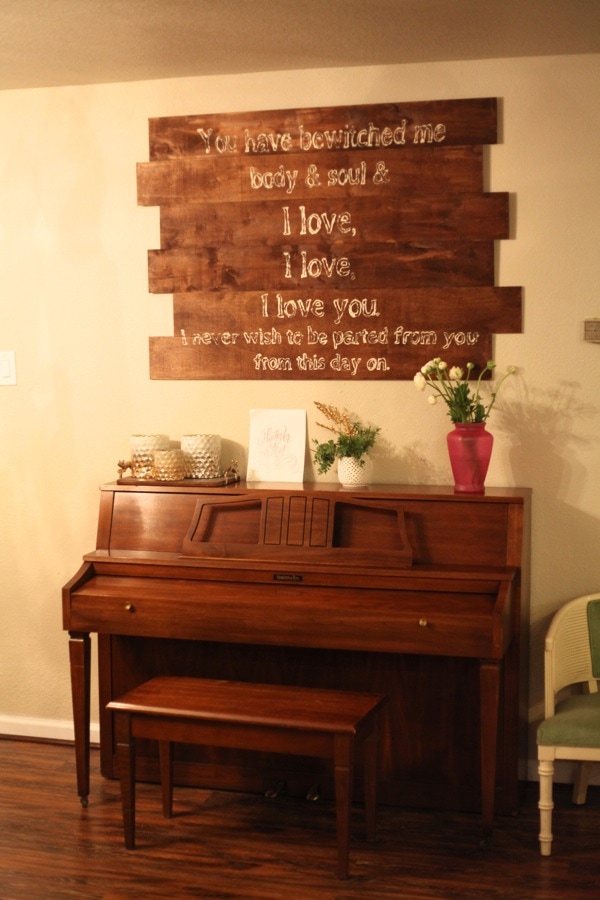 I know some people will scoff at owning a piano when I don’t know how to play, but whatever. I saved it from a life on the streets. 🙂 And I do want to learn. But I also want it to look pretty. And I am throughly enjoying Scott’s playing. 🙂