One of my favorite parts of remodeling is getting to choose the details. Things like paint colors and tile patterns make my heart pitter-patter. So as you can imagine, I’ve been daydreaming about the tile for our shower for awhile! First we had to get the thing built though! 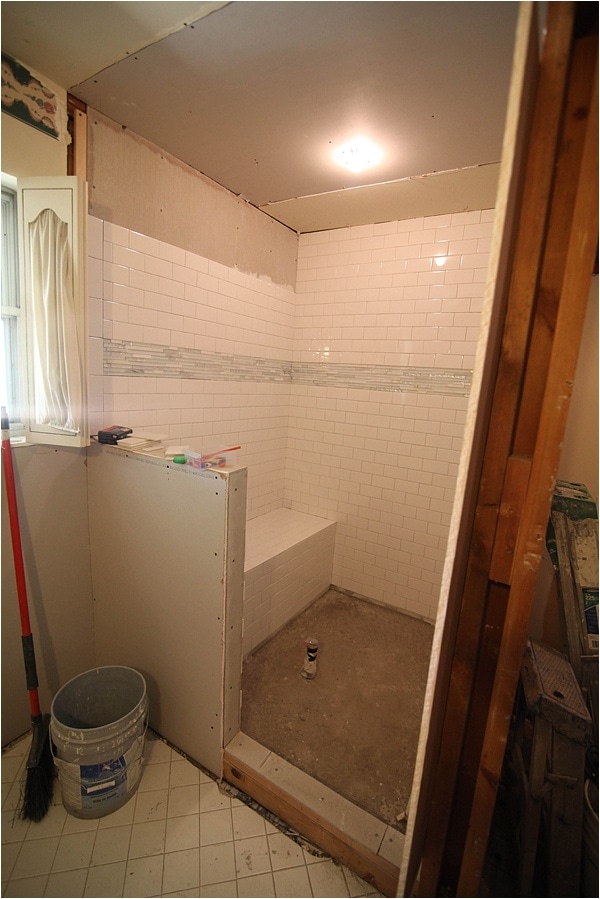 You know how on the shows on HGTV there never fails to be some major issue that catches everyone off guard and everyone panics? No exception here. When we tore the wall open between the old shower and the old closet in the master, we discovered the huge, cast iron vent stack was in between those two walls, not the outer wall as we had thought. 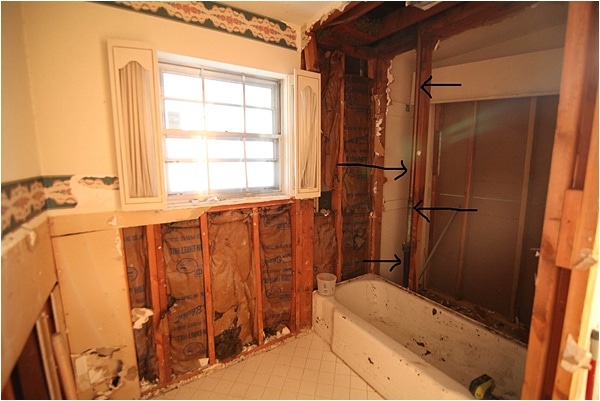 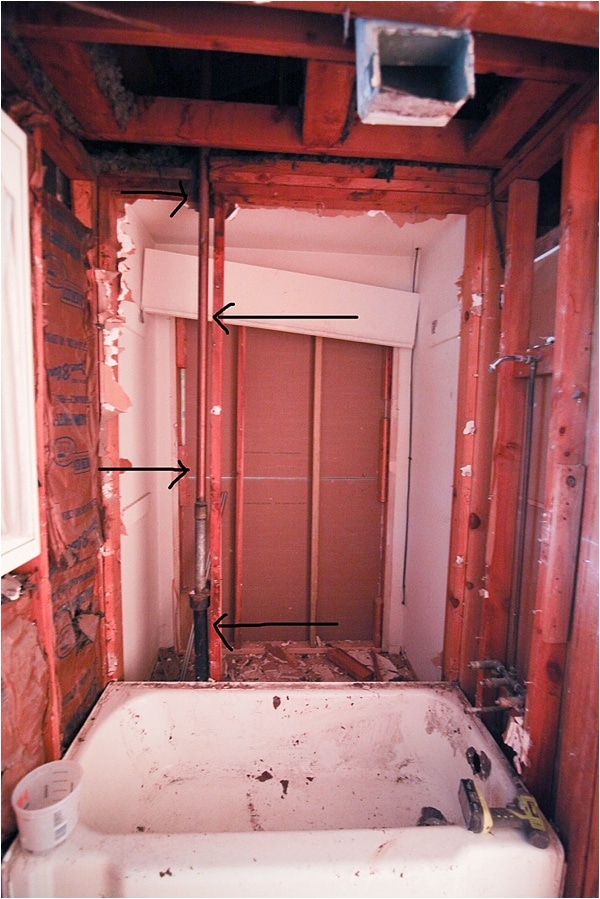 Those are impossible to relocate (well, anything is possible with a ton of money I guess), so our brilliant contracts suggested cutting it towards the base, making a 45 degree angle towards the outer wall and then going back 45 degrees in the attic to attach to the original roof pipe. Brilliant! You can see in the photo below where it cuts back into the attic at the top. 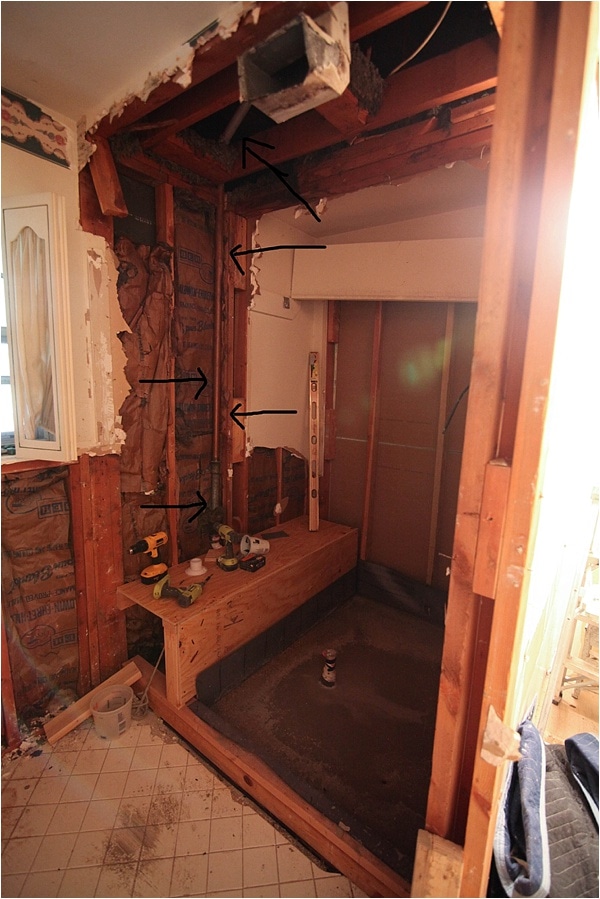 Since the shower is so large (about 5 x 5) and since we had to disguise the pipe sticking out of the ground, we added a bench for leg-shaving, relaxing, or reading a book (do they come in waterproof?? :P). One of my favorite parts of the bathroom!

We also added a half wall for some privacy while showering. I’m liking the open shower trend right now, but a little wall privacy is nice while you are sitting. Plus, it gives you a ledge to put towels or a candle on! 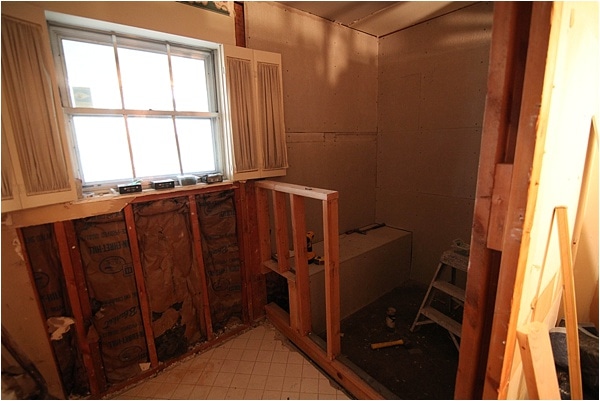 Now the fun part. Tile! I wanted something simple and clean looking, so I went with a classic white subway tile. Surprised? 🙂 It’s actually my first time using subway tile and I’m a big fan. There’s a reason why they are so trendy! 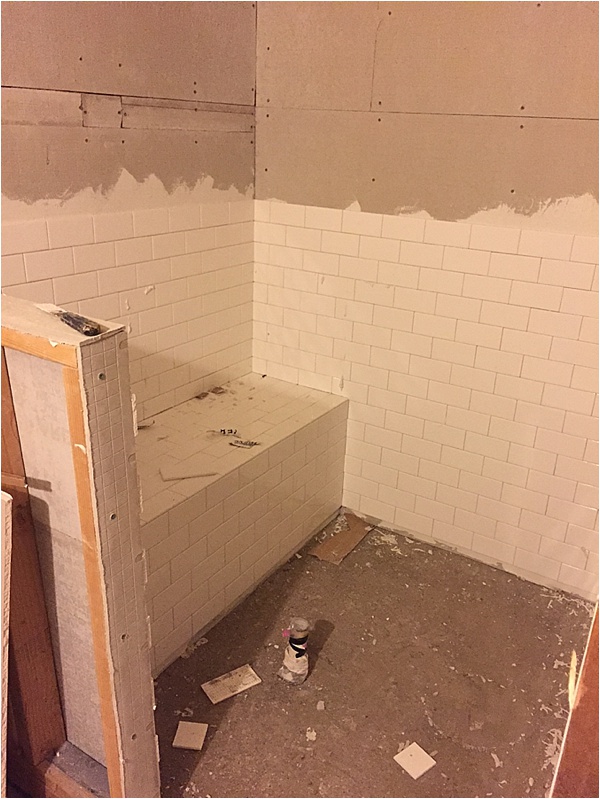 We wanted to give our shower a bit of pop in the sea of white subway tile though. So I picked some beautiful accent tile. It’s a green-gray color with these shiny silver pieces in it. They actually remind us a lot of the backsplash we put in the kitchen! 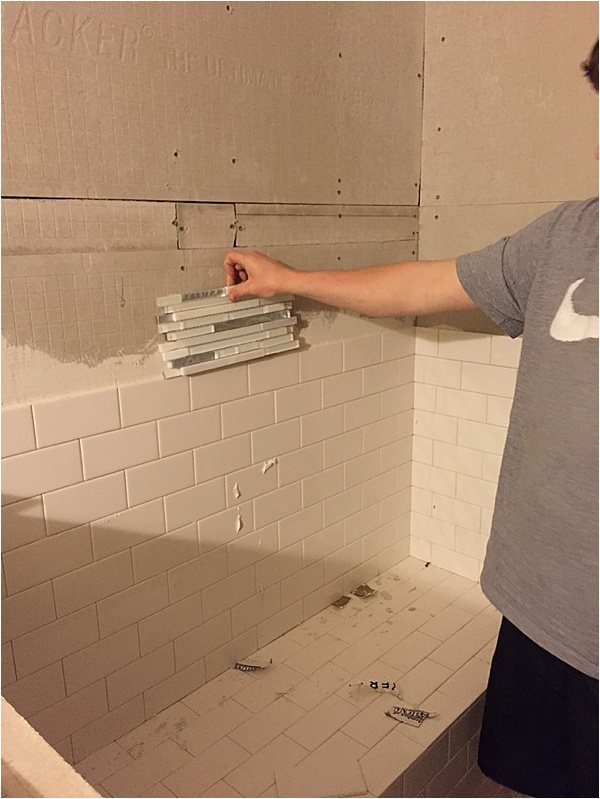 Oh hi, just chilling in my giant, perfectly tiled shower. Running water? No I don’t need that, thanks! 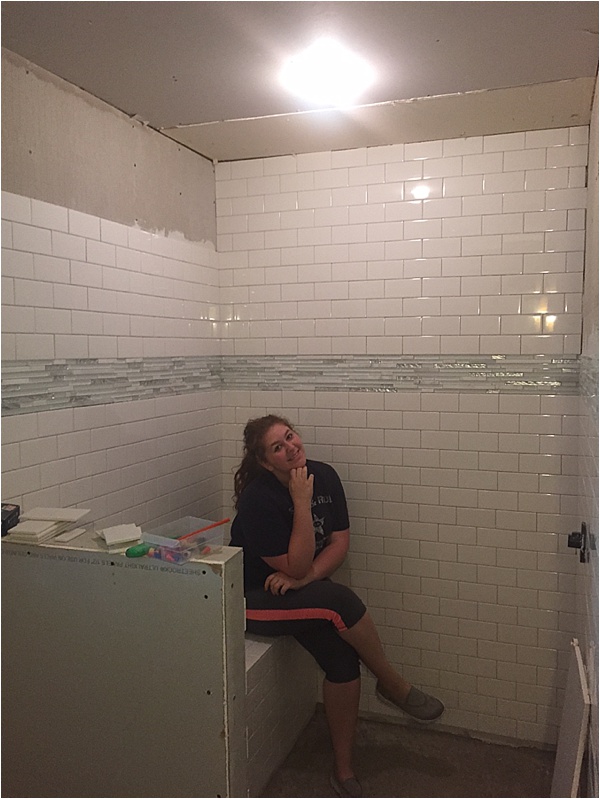 As you can see, we also added a light in the shower. Our contractors took the light that was on top of the old vanity (now closet) which is on the other side of the wall on the right and made it into the shower light. That bulb in there is temporary, we’ll put a better one in there when it’s done. 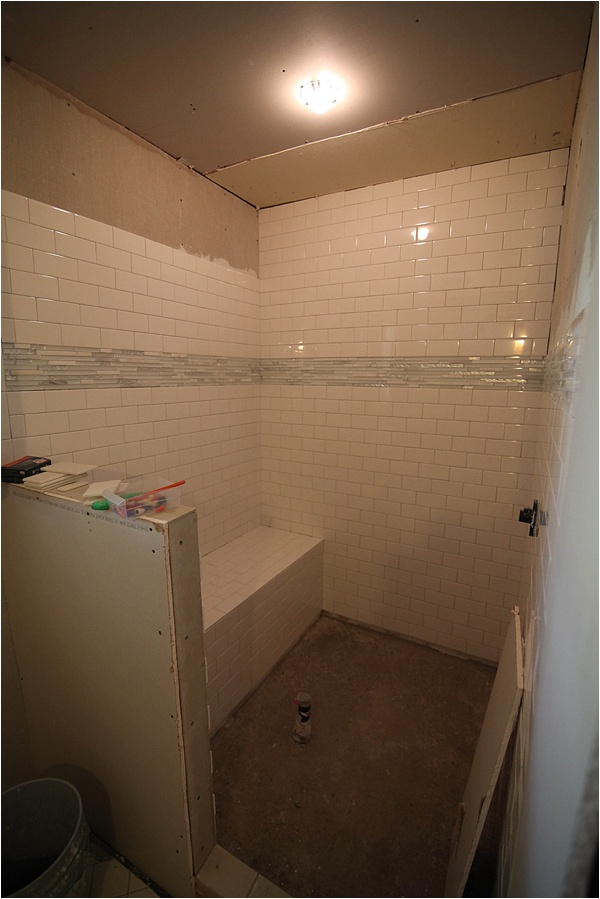 We took the tiles all the way up to the ceiling. We opted to do a simple 4×4″ tile on the floor of the shower. 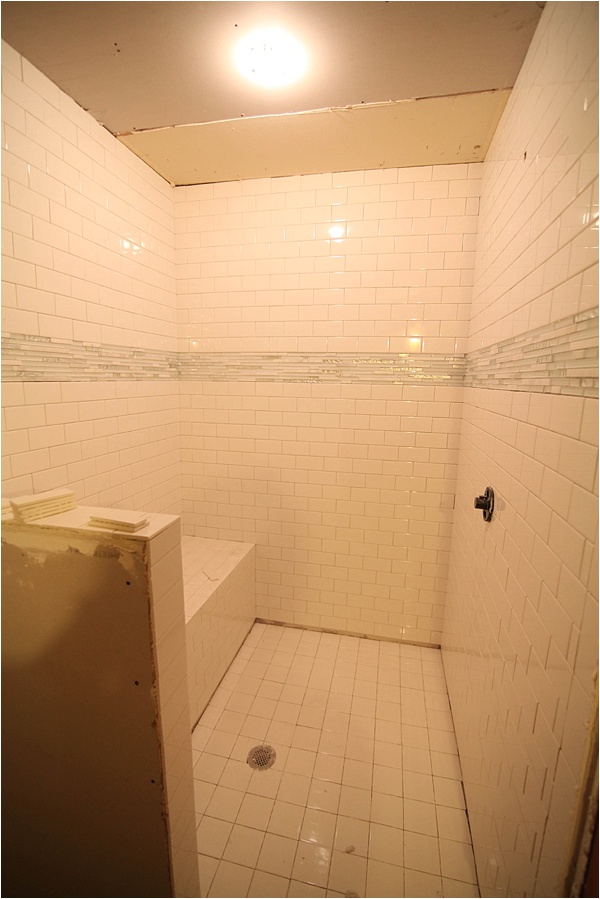 Here’s where my contractor and I disagreed for the first time in the whole process. I had my heart set on dark gray grout, he said he thought it would look dirty.

I did it anyways. I love the look of dark grout, and think it adds depth and a bit of drama to the tile. Besides, cleaning white grout is the most tedious chore in the world. I’m such a rebel. 🙂 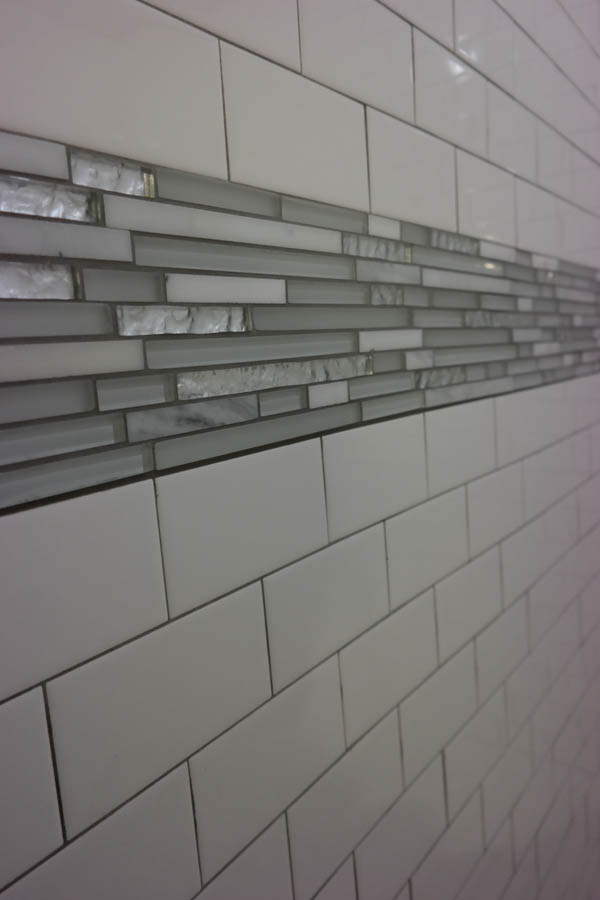 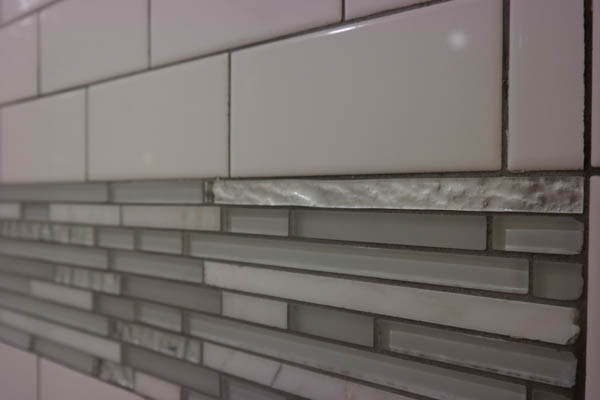 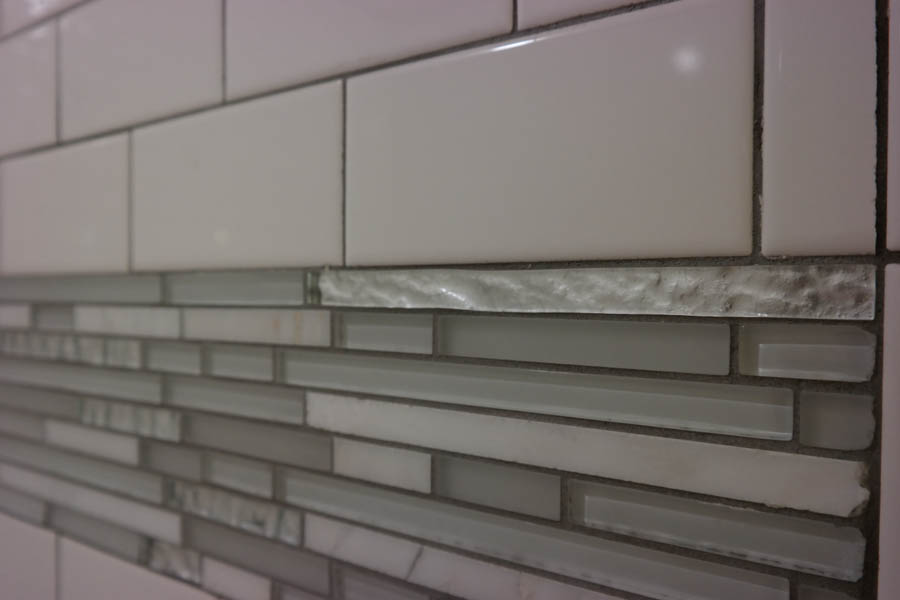 What do you guys think? Are you a fan of dark grout? Back me up here. 😛