I was so excited about house stuff that I totally glossed over Christmas.  At least on my blog.  In real life I was totally celebrating and enjoying.  Yay Jesus!

I had already shared that on Christmas Eve Day my dad had come over and spent the entire day helping us do our baseboards, install our oven and hook up our prep sink.  So, thanks to him…we had a Christmas Miracle.

Christmas Eve was the first time in over 5 months that we had a stove, oven, dishwasher and kitchen sink.  For serious.  Best gift ever!  We also had a Christmas Tree & a dining table on loan thanks to Scott’s parents. 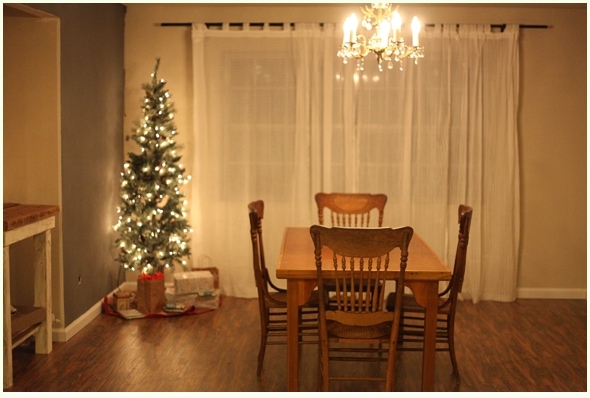 So, Scott and I did what I had been dreaming about for months and months.  We cooked a Christmas feast while the fireplace was roaring in the background and Christmas music was turned up.  We were giddy! And we were drinking champagne!

We had a lot of funny conversations such as me asking Scott to get the colander out, him not being able to remember what that was, and me being unable to figure out where I had put it.  Is it possible to forget how to cook when you have a 5 month gap? I think it was like a bike.  At first it was like- YES we are gonna do this, then it was like noooo CAN we do this?? But by the end we were all like OH YEAH we got this!!! Or something like that. 🙂

On the menu?  Cauliflower mashed potatoes, honey baked ham, bacon brussel sprouts and champagne. I told you we went all out! 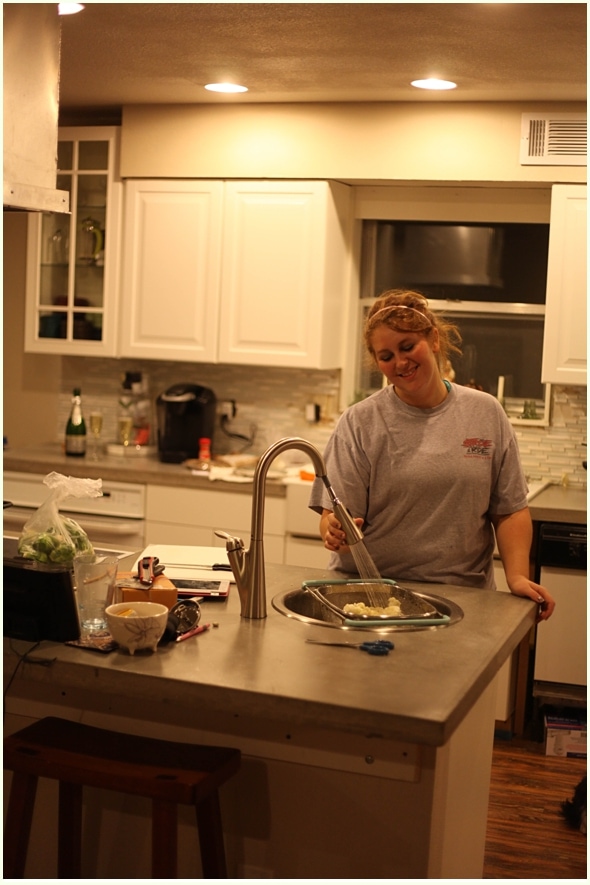 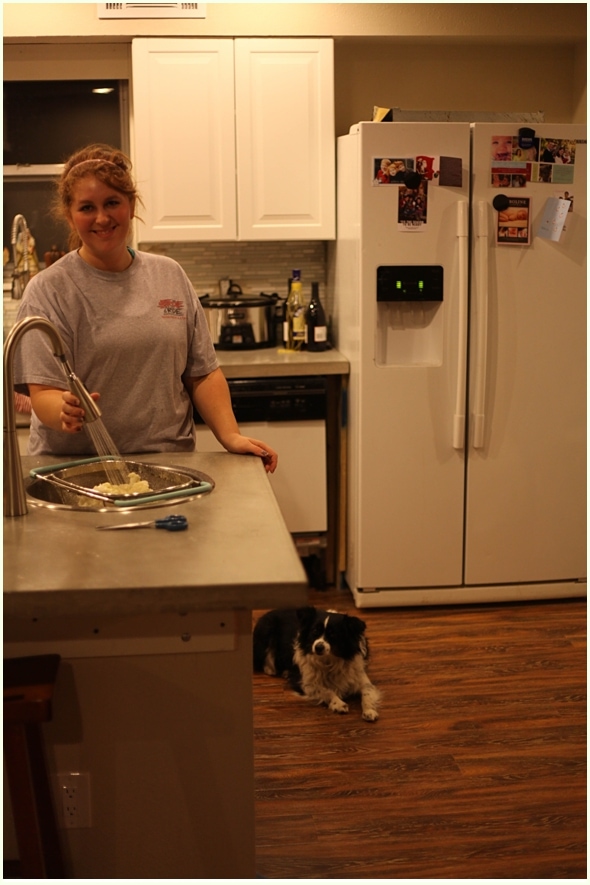 (Look how happy I was to be washing vegetables! Hooray! Working sink!! YAY!) 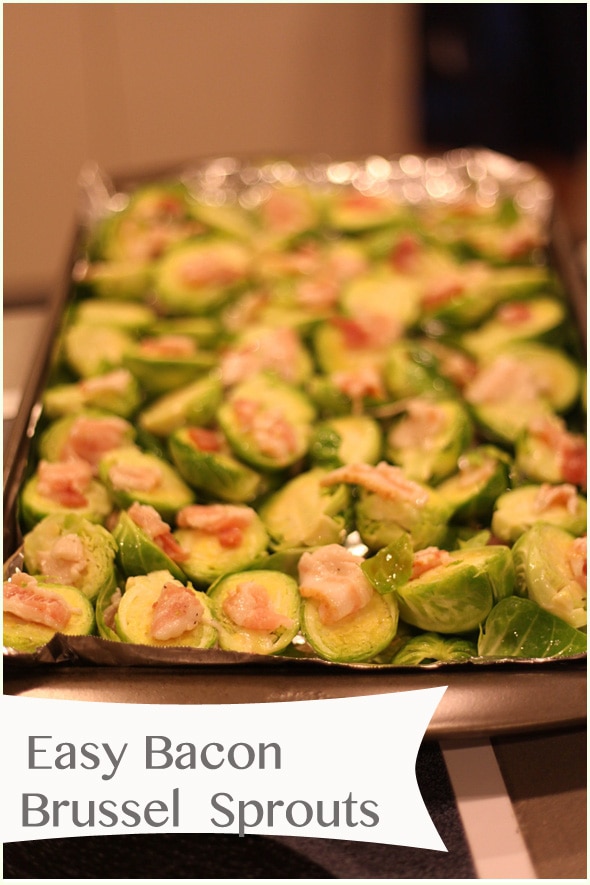 Bacon Brussel Sprouts are the easiest thing to make.  I took a pound of brussels and washed and dried them, then cut them in half. I lost a ton of leaves- they just kept peeling off the outside, but it was okay. It happens.  No biggie. You dry them off with a paper towel, lay them in a roasting dish and cut 4 bacon slices into tiny pieces and lay the bacon on top of the brussel sprouts.

Then your husband eats it. Then has seconds.  Then wishes there were thirds.  Then always brings up how good bacon brussel sprouts were.

Random Bacon Story: a former coworker of mine really liked bacon, like a lot.  In fact, he said he didn’t understand why girls wore perfume.  In his mind, to catch a man you don’t need to mess with flowers and spiced scents…instead, just dab some bacon grease on the back of your ear and watch the men come running.

Luckily for me, I had a man at the time so I never had the opportunity to test the bacon man catching perfume theory. 🙂

Back to Christmas- our champagne was super special.  Our realtor had given it to us when we closed on the house and Scott and I decided to save it for a “victory drink” when we were done with the remodel.  So Christmas Eve it was.  It was really yummy.  Victory tastes so sweet and bubbly. 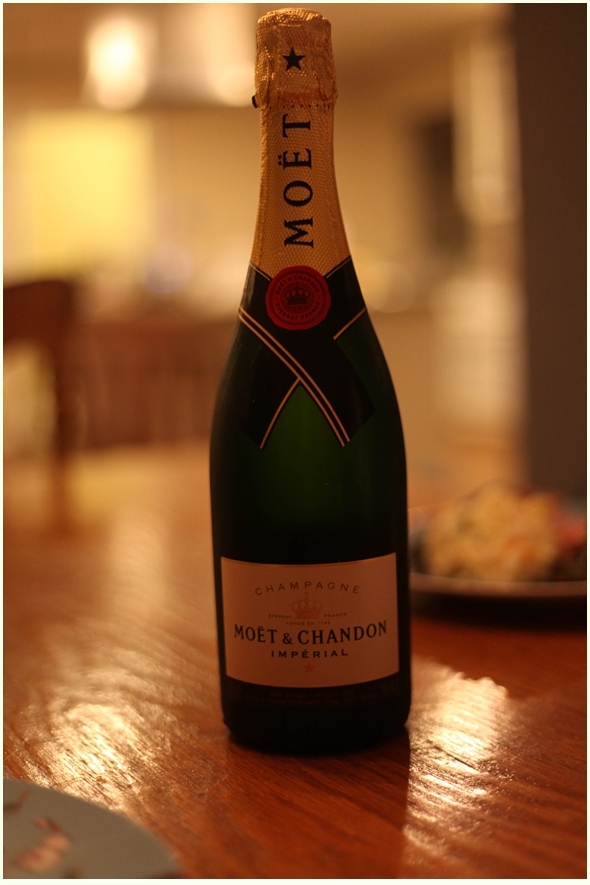 For dessert I made homemade marshmallows and whipped cream (I was REALLY excited to have a kitchen!) and sautéed some apples with butter, brown sugar and pecans.  We capped off the evening with some hot chocolate and sitting by the fire. 🙂 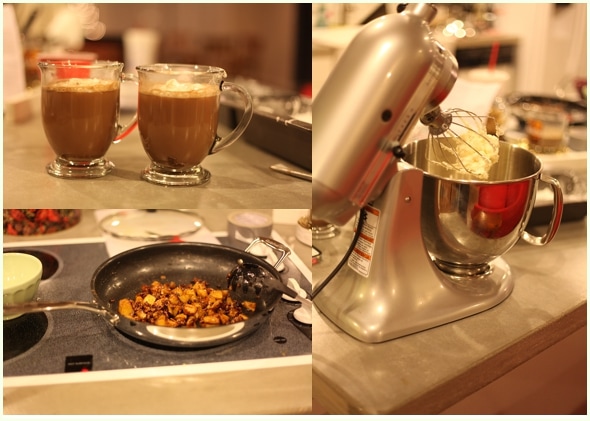 We had already celebrated with Scott’s family the week before, so on Christmas, Scott and I went to see my parents near Fort Worth.  On the way there- Scott got his Christmas Wish- snow! So we both got our wishes- mine a kitchen, his some snow.  😛  Of course as soon as we got to my parents’ house I made my dad take pictures of Scott and I. 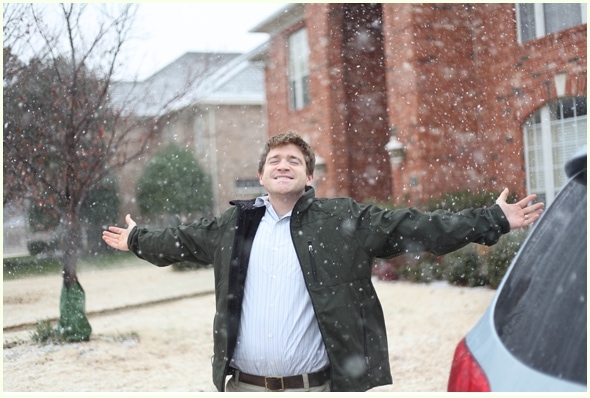 We totally failed at the jumping thing.  Really bad. But we had fun and failed together!

As always- we had a blast with my family and continued the holiday tradition of everyone having a fun hat.  Tally and I decided to opt out of photos 😛 But don’t they all look cuuute? 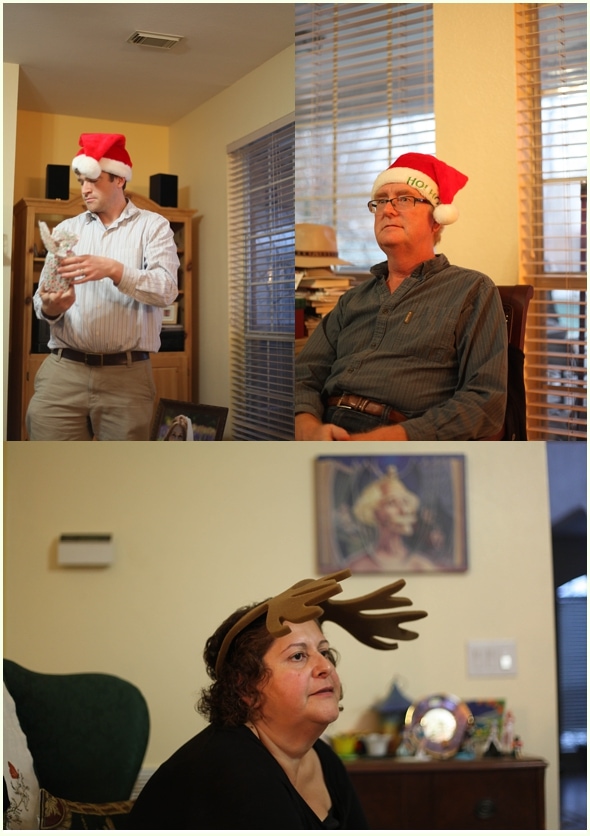 I got some good gifts this year -these are a few of my highlights- a Keurig from my in laws, a show I had never heard of but now I am obsessed with and feel like I was under a rock for 2 years- Downton Abbey (Scott picked that one all by himself!) and a gift certificate to cratsy.com from my parents.

I think this was my best Christmas ever. I felt so loved and so blessed and so grateful for Jesus’ birth. 🙂 So there’s a pro to being a month behind on this post….I am feeling the Christmas Spirit all over again! 🙂

1)Favorite K Cup? So far mine is Cafe Verona.
2)Any other Downton Abbey fans?!?!?
3)What classes do you recommend from Craftsy?
4) Ladies- Would you put bacon grease on your neck to get a man? Men- would bacon perfume work? Should I get a patent going? 🙂