×
1098 shares
This is the story of a humble pair of built in bookshelves with very blah fireplace stuck in between.  This wall is one of the few that survived the Great Kitchen/Living/Dining Room Remodel of 2012.  Sure, at first they were super ugly and a lot of people thought we should rip the bookshelves out right along with everthing else in the living room.
But I had a vision.  I believed in these bookcases- that somehow, with some TLC and paint…somehow they would be cool again. Was I right? Ummmm…duh, of course! 😛

The photo(s) below were taken on August 8th, 2012. I know this because it was the day after our 3 year anniversary/when we moved into our 3rd house.  We didn’t even wait 24 hours before the demo begun. 🙂 You may even remember this scene from one of my first blog posts aptly titled “Demoing Our House” 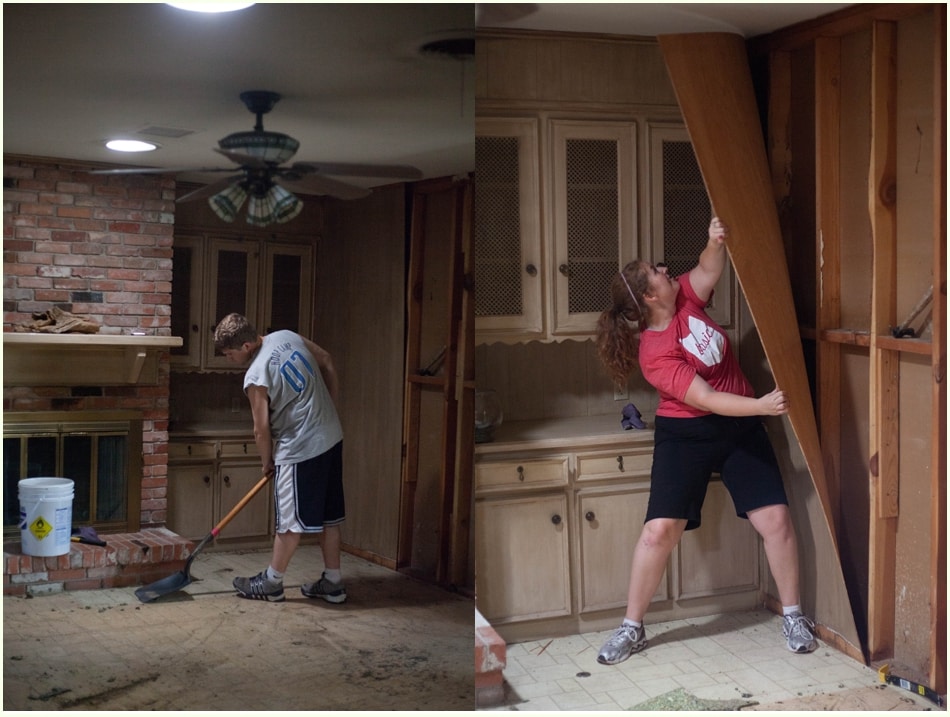 Here is a wide shot of our shelves.  I was shocked looking at this photo- how quickly I forgot what a crazy mess our house was for months and months.  Who needs a ceiling in the middle of Texas summer? 😛 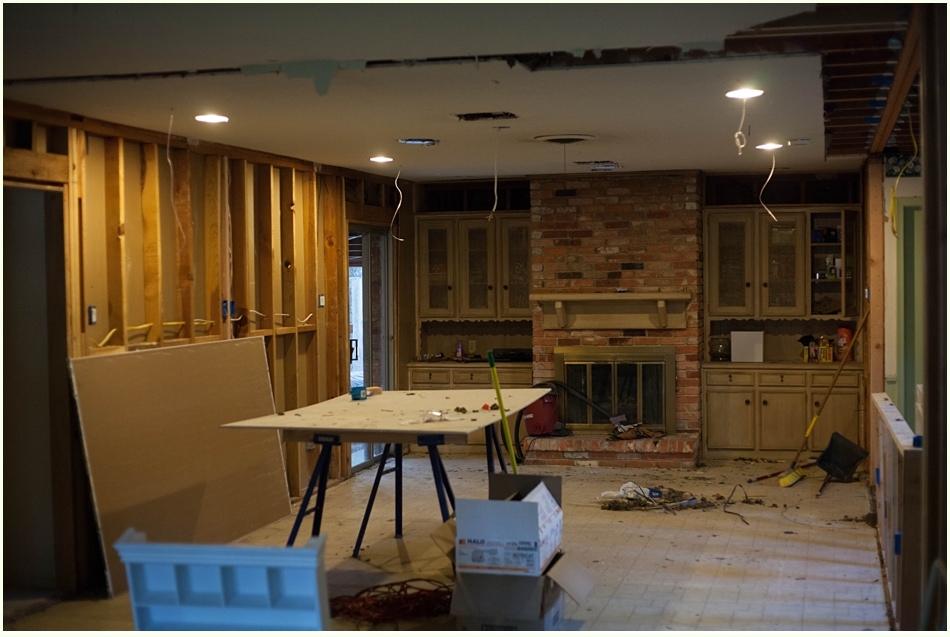 Things started looking much, much nicer when we patched the ceiling and whitewashed the fireplace. Instantly the room seemed brighter and lighter. 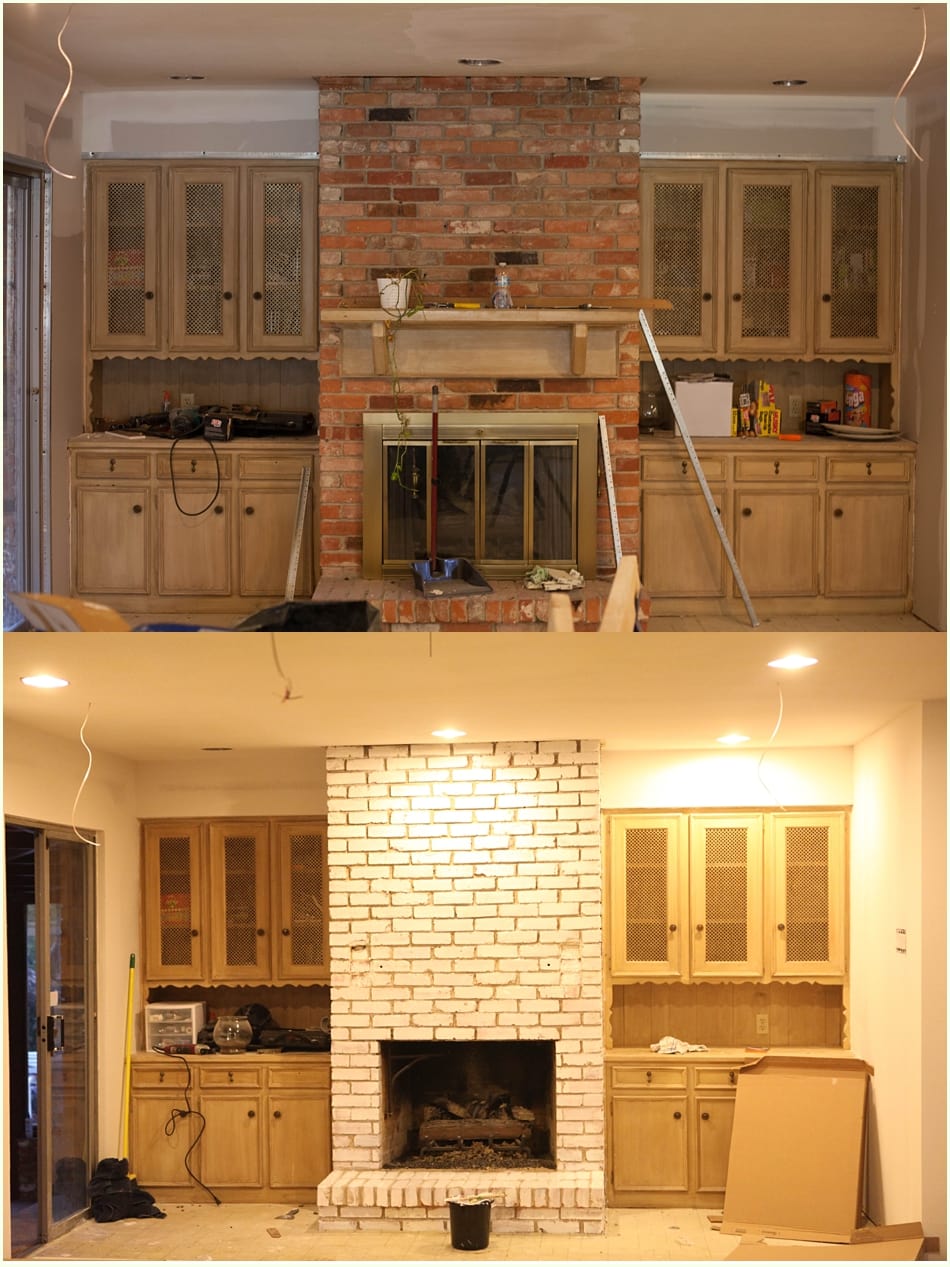 The origional plan I had was to keep the bottom cabinets for storage and take off the top cabinet doors to have open shelving.  Once we took the cabinet doors off the top however, we decided it wasn’t looking so hot.  The doors were hiding some dated looking crossbeams and some curvy wood peices (technical name, of course!).  So one night, at around 1 am after staring at them for weeks, Scott decided just to rip all the cross beams and random trim pieces off.  Probably not the best idea in the middle of the night, but we did it anyways….and it was looking rough.  On one hand the shelves looked way bigger and nicer from far off, but when you got closer you could see the uneven, rough edgegs of wood from the peices we ripped off.
Oops! But we liked it anyways (see how much better the right side looks then the left in the photo below?) and figured we could fix it later, maybe during the day sometime :p 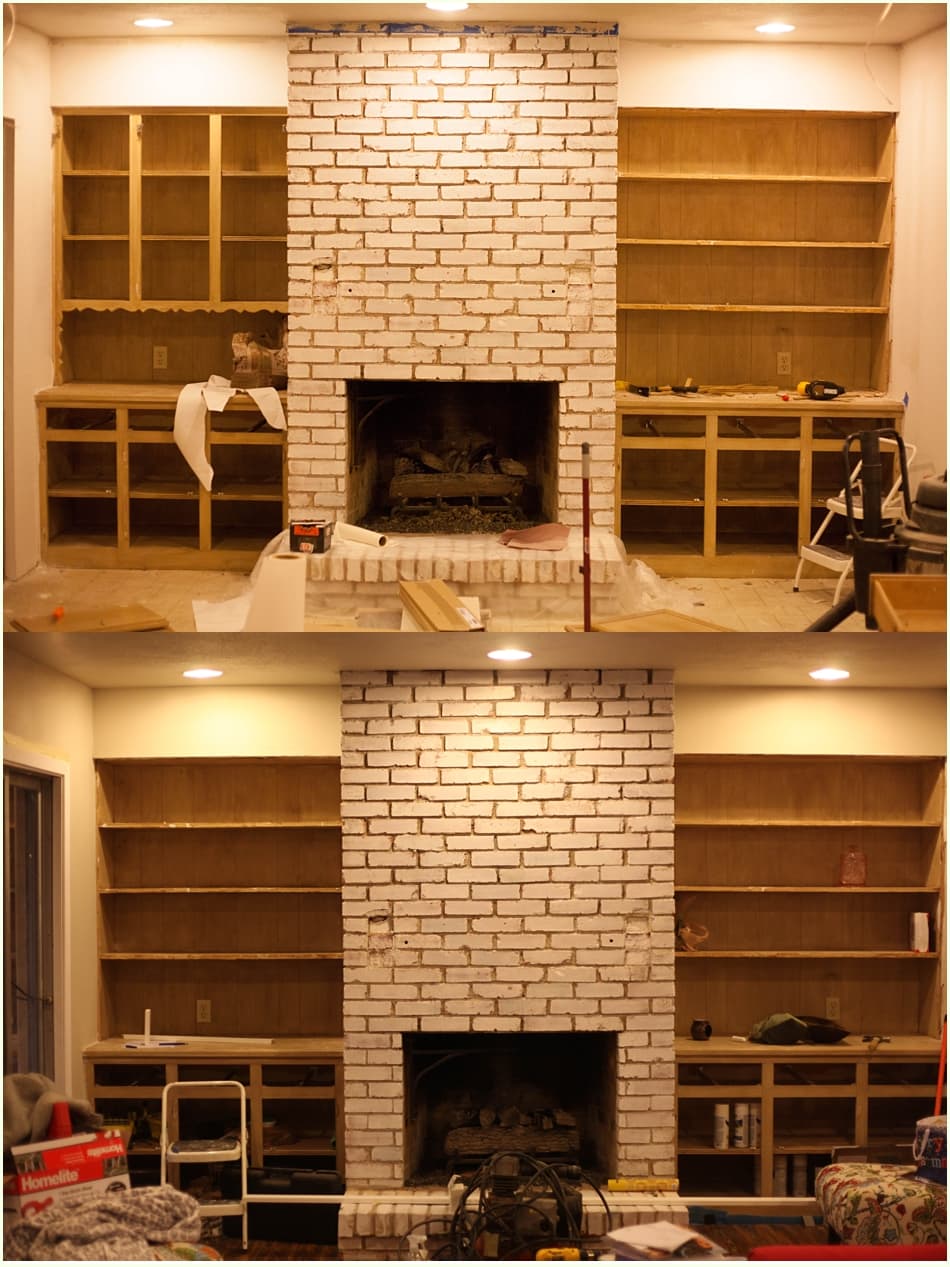 After a few weeks of brainstorming and asking advice from people much wiser then us (aka parents), we decided to spend the day after Christmas trimming our bookshelves with primed 1 x 2 trim peieces.  I measured, Scott cut, I photographed and Scott nailed them in with a nail gun.  Nail guns are scary! I felt bad for being so freaked out but them but when watching DIY network and the faces of the ladies who are trying to use a nail gun…well I feel better about myself a tiny bit. 🙂

After trimming the bookcases (they look SO nice!) it was painting time! I had origionally wanted glossy white shelves, but after seeing some cool pins on Pinterest I had debating painting them every color from a matte gray to a bright blue.  In the end, though, I decided to stick with the glossy white for the main reason of wanting to have a blank canvas to decorate with various pieces and accent colors.  I love the idea of being able to make the room instantly look different with a couple peices on the shelves coordinating with some throw pillows on the couch and some fresh flowers….love!
We thought the best way to paint the shelves was spray paint.  #Fail.  The spray paint got everywhere, including all over us and seemed to be like a cloud of killer fumes that wouldn’t clear out for hours.  So we boo’d that plan, took the spray paint back and stuck with a roller/hand brush combo…and 5 coats of paint later there were no signs of brush strokes, phew.

I couldn’t let the shelves be completely devoid of color though! So I decided to spray paint the inside of the drawers glossy Sun Yellow.  Woo hoo!
5 coats of spray paint later….done and done. 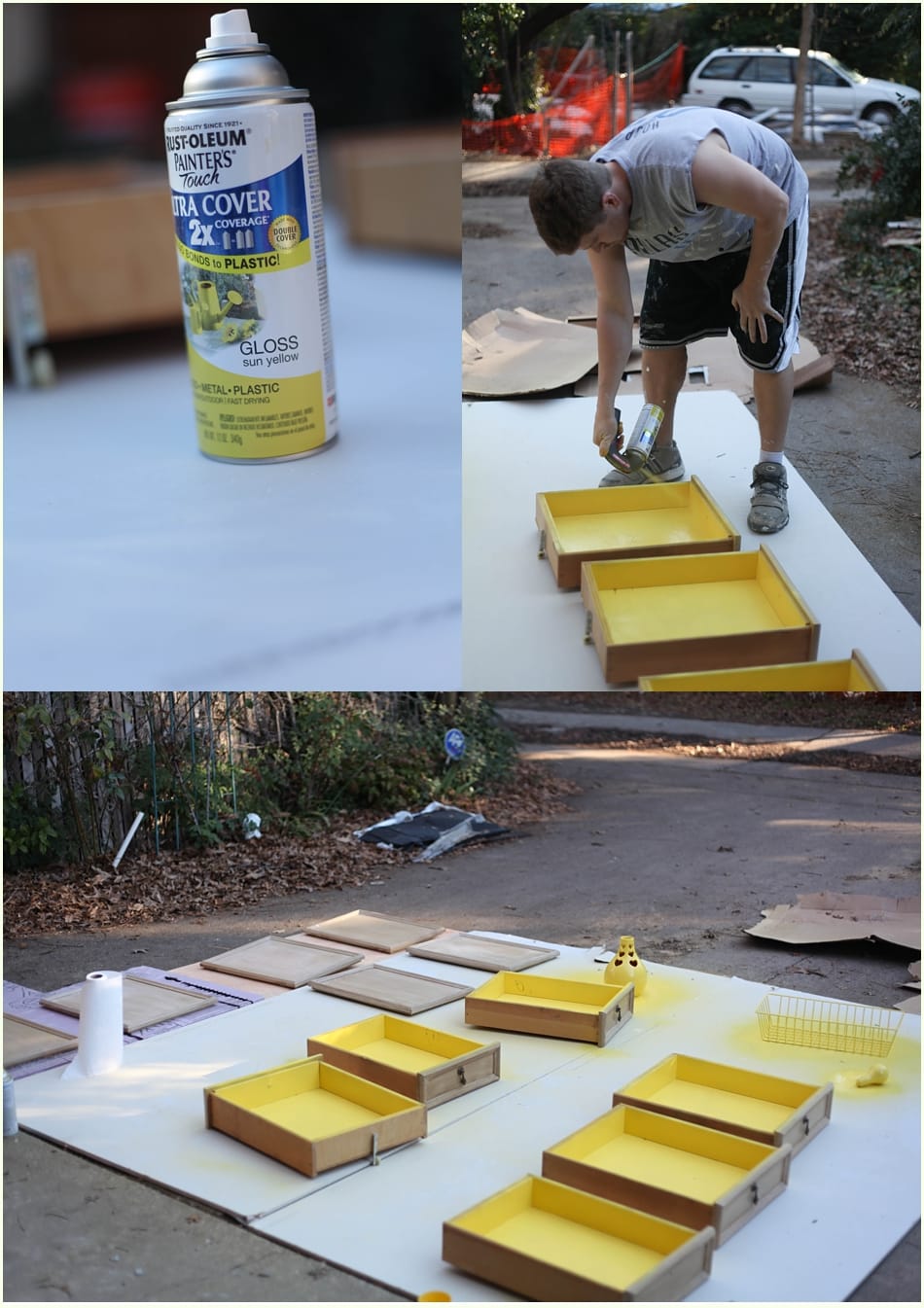 After the spray paint dried I flipped the drawers and painted the outsides white…and 5 MORE coats of paint later, over a period of 6 days…finally, finally, finally…done. 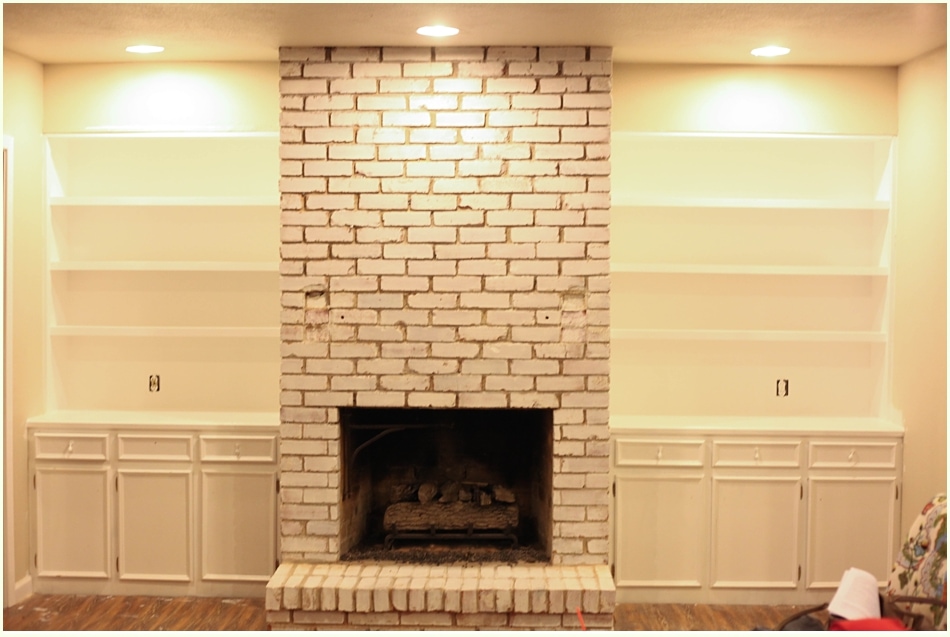 Pretty fantastic right?!?! Here’s a comparison of just the left shelf and it’s transformation from drab to fab! 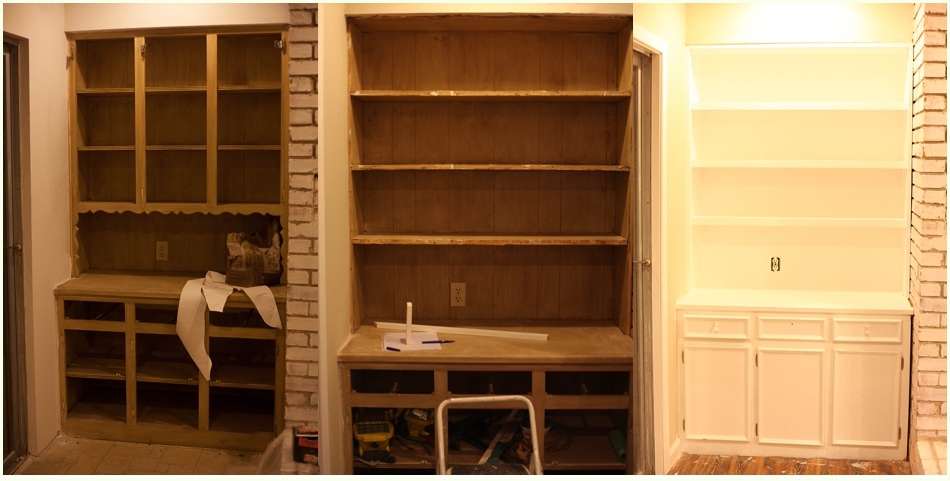 One final before and after! To all the built in naysayers….haters gonna hate but this bookshelf looks GOOD.  Our entire living room looks so much happier, brighter and more modern! Next step is the REAL fun…decorating, woot woot! 🙂 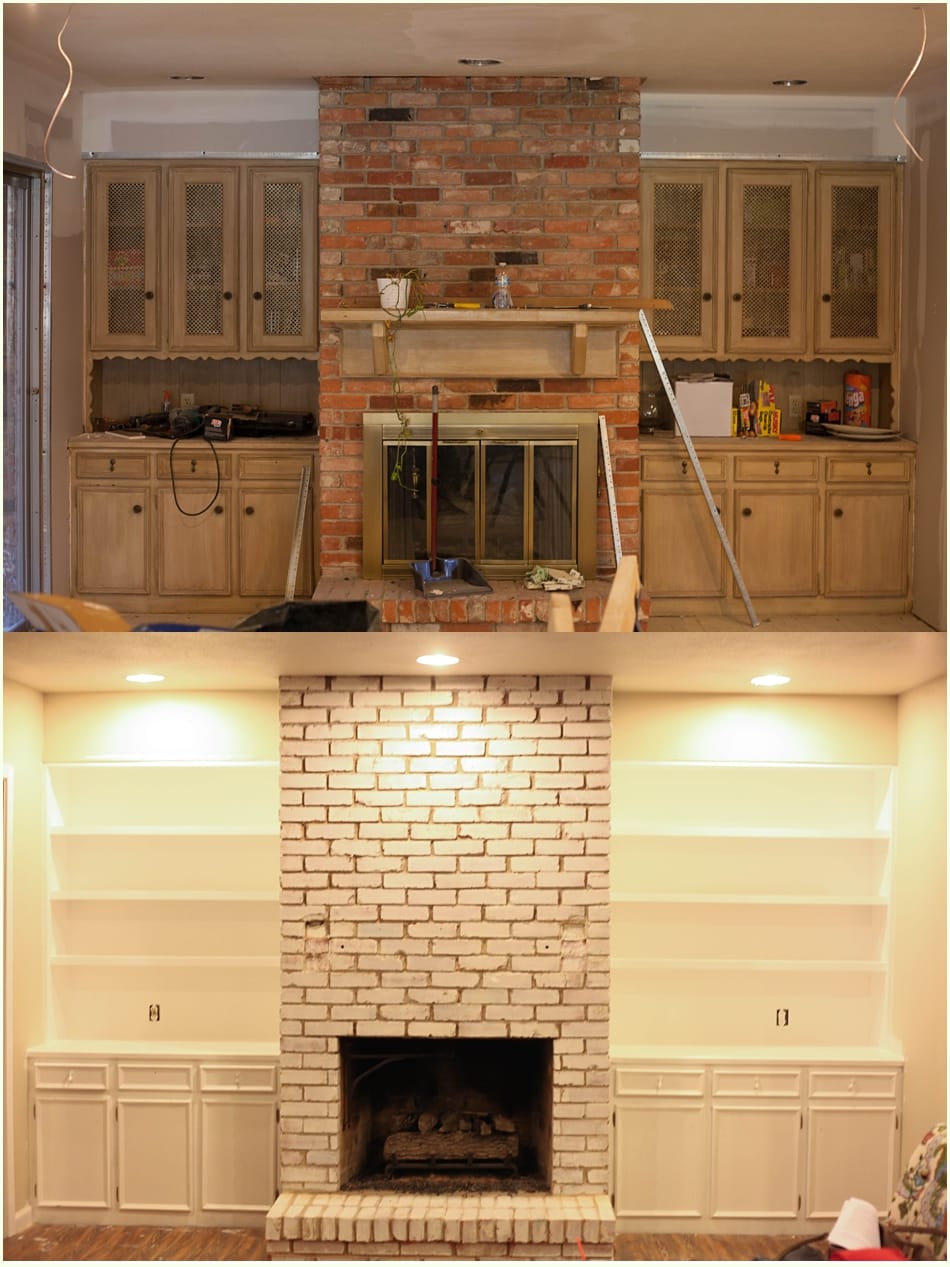